The path of the winner

We saw it last time, in that electrifying end. Although he was fighting until the last seconds, luck and the jury chose only one. It took an entire year for Eduardo Enrique Alayón, Tito MC, to finally be crowned winner of Red Bull Battle of the Roosters.

"I think it was my Olympics," he says, recalling the peak moment, when the audience chanted his name and tears flooded him, along with the embrace of the other competitors.

Tito's story began just the other day. In 2016, Weekly Package through, saw some videos of the Urban Potaje festival, where they hit Sicario, Carlitos Urban Poetry, Citizen, Tanke, ... "I saw them as gods," he says. Citizen won on that occasion, and he wanted to continue his performance in the international final of Peru. Then he discovered the Mexican ACzino, and there was no going back. Months later he appeared in a battle for the first time.

With it the tendency of improvisation to become independent of its origins is confirmed. “The subjects of the Villagers caught my attention, of course, who doesn't like The Villagers; but he was not a faithful rap follower. Mine is the freestyle"

The "old school" —caste rappers— It remains on a heroic level, albeit far away. “You cannot compare Messi with Maradona, each at the time. It is true that what Adversario and El B did in 2006 and 2007 was outrageous, because there was no Internet or anything there; those people took the talent 'to lung'. They do have to be respected for what they did, that is unparalleled; but they cannot be compared with us now, because there is an evolution of 12 years. They are MC, we are freestylers"

Every five minutes the champion uses sports metaphors, perhaps because his method resembles the constancy of the athletes. “Sometimes I practiced two or three hours a day. I have an application, Rap battle, which has several ways to improvise, on objects, images, you can change the time ... But I have already 'burned' so much that I change for Wikipedia and choose concepts, and I dedicate a minute to each one. I see many movies, series, when I find a new word on the street, I have the dictionary on the phone and I look for it, I'm curious for that, what I don't understand I want to know. ”

The international final of the Battle of the Roosters will be in December, in Madrid. “I want Cuba to pass the first round —since 2006 we have not passed—, recognize that there is good here freestyle, and open paths for other international events. Not only the Red Bull, there is also Supremacy, God Level. What Yeriko started in Argentina I want to continue. ”

Daniel Rodríguez Concepción (DRC) debuted in the previous edition of the Battle of the Roosters, with only 18 years. Now he finished second and in November he will represent the Island in the BDM (Battle of Masters), in Peru. He and Tito train together these days, in a kind of "national team." 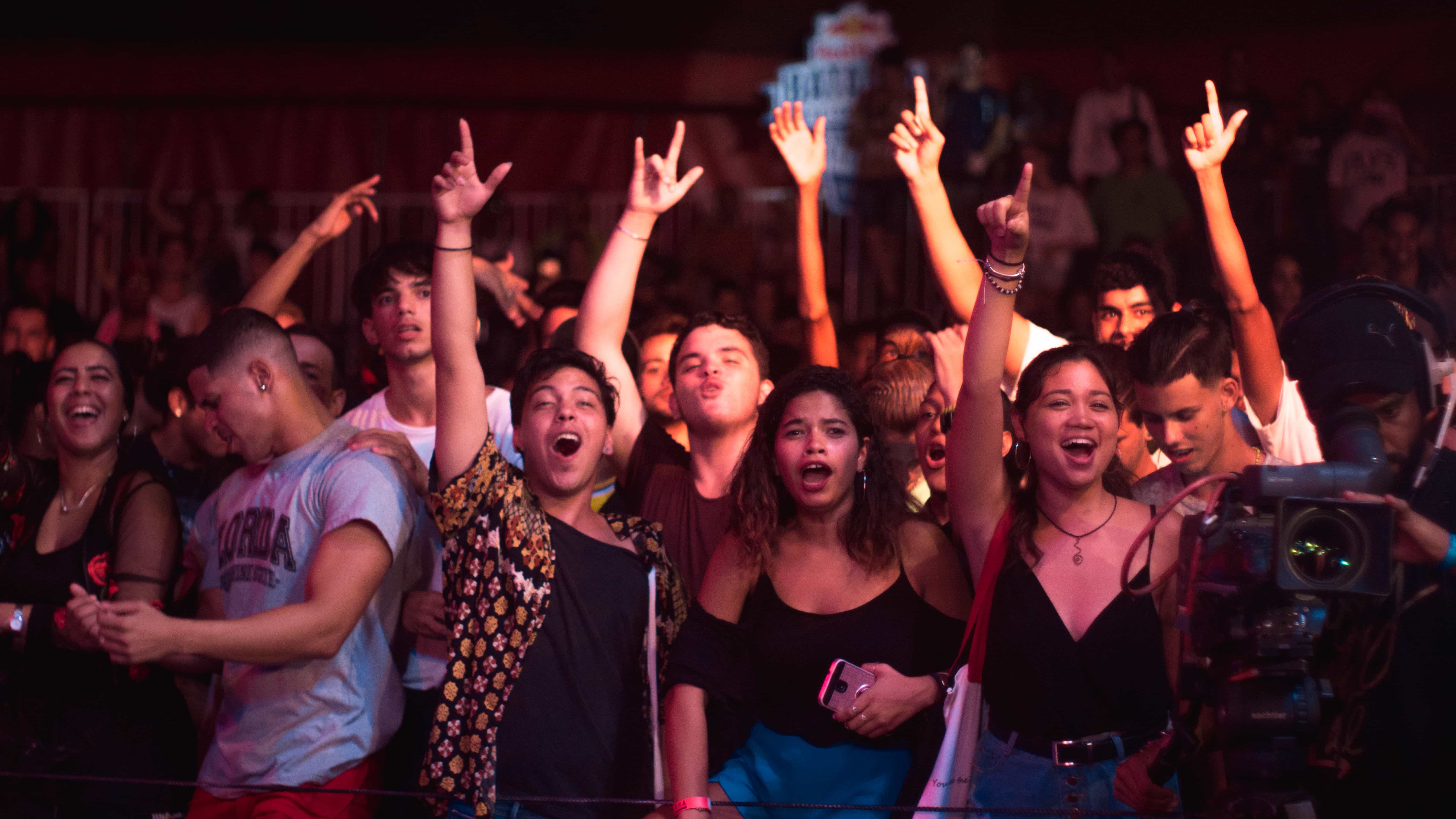 “Look, in the God Level Deluxe there are three representatives per country, one team, and Cuba did not take it. We would have gone Yeriko, DRC and I to give tremendous fight, and beat a pile of people there. ” Just like baseball players or volleyball players, improvisers need to get involved in other leagues.

For more similarities, the champion is considering retiring after the big competition. “It depends on how I go in the International. If I play a good role, I continue and I get hard pal freestyle. But if unfortunately I lose ... I don't know, I already think about taking off, that makes me very stressed because I always want to win. I accept when I lose, but inside it itches. ”

In August, a girl, rapper Damarys, competed for the first time. As machismo shows its ear everywhere, perhaps in battles too. Or maybe not so much. “If I lost with a woman who has no level (as with anyone), I would feel ashamed,” says Tito. “But if he has a level, and he beat me, I can't get angry. Gender has nothing to do with it. There is a rhyme of Wos, the Argentine champion, who says: 'the important thing is not gender but what it generates' ”.

And since we are, let's ask everything. Is it true that some rhymes are written in advance? "Yes Yes. The others tell me that I am the most 'bookshop' in Cuba, but they are like María Ramos' cat ... Here everyone writes to them, and whoever says no, is lying. ”

“One has to go ready for what the opponent is going to throw at him. For example, they throw at me that it was second, that if pretty, I do reggaeton sometimes, and I have a saved answer, an ace up my sleeve; You always have to have it.

“In fact, I lost in Matanzas, in the first round of the BDM, because a kid threw me the complete notebook, and I didn't know what to answer. But it was good that it happened, because it made me prepare more; I was underestimating people, and I see that you can't underestimate anyone. ”

The rivalry among the best is inescapable. However, one thing is one thing, and another thing is another thing. “Yeriko is my brother. When he comes to Havana he stays here, and if I go to Holguín I also stay at his house. We motivate each other, it is a healthy competition. ”

This year they crossed in semis, what we would call an advanced final. “The classic of Madrid and Barça we say here. And DRC is being Liverpool, which came out new now and is hard the same. ”

Some will comment that Tito MC is a genius and figure of the fighting cock: quarrelsome attitude, ego up. However, he speaks in his favor the way he expresses himself about others. “You also have to put there that Yeriko was the one who revolutionized the freestyle Cuban, the one who brought the rhymes with comparisons, the 'carambule'… That must be taken into account. ”

Come back to tell it

Yeriko has that duality of Doctor Jekyll and Mister Hyde: all polite if he is off the stage, and an explosion when it is his turn to rhyme on the track. After winning in 2018, he now finished fourth.

“Actually, I knew it was very difficult to 'double-beat', in fact, it has happened very rarely that someone wins like this often. I felt good, maybe I had not trained so much because I had enough work with music ... And well, it did not happen, but I think that what has to happen happens, and this time it was not my turn. And very happy for Tito. ”

Again: what happens on the platform, stays on the platform. “We have a fairly solid friendship. Besides, we understand that the freestyle It is a discipline, like a sport. The boxers fall to pineapples and in the end they hug; imagine us. ”

Manuel Alejandro Delgado finally achieved his musical project, Loui and Yeriko, a duo that has piano behind, drums, electric guitar, trumpet, trombone and DJ. This format allows them to cover a variety of genres and present themselves in different areas of the province.

Undoubtedly, his victory as an improviser has served to clear the route. Once champion, always champion. “I think they give more credibility to my work. Sometimes I get to the places and find out that I am the winner of the Red Bull, and how they take me more seriously, so to speak. I feel that my professional and life vision has been very open ”.

As long as time permits, Yeriko will continue in the battles. “I love improvisation, much more than the fact of competing. I plan to sign up for the next one, but there is still a year to go. ”

Meanwhile, the experience of the final in Argentina continues pulsating and in colors. “It was something super big. That weight of representing an entire country is always a pressure, and also a special feeling, because you know that you are giving face not only for yourself, but for a pile of people who want the same as you, who dreams the same as you, and you know you can't let them look bad. ”

Spanish-speaking improvisers communicate in the same vertiginous language; Nothing like finding someone who understands you. “Generally when freestylers They know each other makes very good chemistry, they have a special relationship. The only difference I perceived between foreigners and us was that they were going to continue participating in international events, and perhaps they did not have the pressure that a Cuban could feel, of knowing that this is the only opportunity to demonstrate what you can do. ”

After the bumpers, many approached to talk with him, amazed that Cuba had freestyle with so much caliber, and they assured that they would observe the national battles more closely. "In this inter They are going to surprise you a lot with Tito, because we have a level like never before. I'm sure we can go quite far. You will see".

A journalist in training and professional coffee drinker. She sings not in the shower, but in the kitchen.