Jako Fedez and Dariel Cabrera, the members of the duo A la 2, were still reviewing the songs for their next concert when I arrived at them encouraged by Pantomime, their debut EP. Two songs later they conclude the rehearsal, Dariel brews coffee and Jako confesses to me how he himself is in charge of designing the album, that just one day after its release he still hasn't finished the cover and that he will have to do it tonight. Once the cups are served, they sit in front of me and tell their story. They met through Alejandro Serrano, a mutual friend and current bass player. He was familiar with their work and thought they might work together. At that time, Jako was running a rock at the Hola ola recreational center and began inviting Dariel to play.

Jako: At first only friends came to see us, then the audience got bigger and bigger. Little by little we realized that we accompanied each other very well. I did the second voices for Dariel or he for me.

Dariel: That's where the idea of doing a duet came from. We began to open the rock together and both of us began to have more and more participation in each other's songs.

Jako: We think that the idea of squaring plays with the principles of the duo. We both compose, play guitar, sing and are equally involved in the project. Separately we are the same numerical value, when we come together, the number is multiplied by itself.

Some time after the rock, jobs began to arrive in restaurants such as La Cocina de Esteban and La Maquina, playing their own songs and versions, while recording some singles. These helped them enter the first edition of the Festival Universitario de Cantautores and compete with groups with similar formats such as the Iris and Saudade duos. They got the second place in the contest.

Jako: It gave us a tremendous boost to reach that position and be recognized by a large jury, made up of Marta Campos, Jorge Iván Martín and Luis Barbería. It was confirmation that we were getting closer to a professional level.

Then the quarantine arrived and, fleeing from inactivity, they decided to join Vox Cordis, a sacred music choir to which they still belong today.

Jako: In a recess of the pandemic, in the middle of 2020, I found an ad that was looking for singers for the choir. Thinking that it would benefit me to perfect my vocal technique, I decided to join and after a while I convinced Dariel to join. Today Vox Cordis seems essential to us, it has been and continues to be a great school for us. The exercises, the precision that the notes must have, knowing how to mix your voice with those of the rest of the choristers, has made us find greater solidity in the duo's performances.

Jako: It's an EP made up of four songs, two of each. The first is my authorship and is the one that gives title. It's about love and heartbreak; about becoming the reflection of the couple.

Dariel: That's our war horse, we play it anywhere. That's why we decided to place it in first place and baptize the album with this name. We want it to be our cover letter.

Jack: Next is slowly, a blues I made about the idealization of love.

Dariel: The next one is. Amnesia, a small song in terms of duration, but that I value a lot. It talks about a person with this condition who has a fleeting love affair and then forgets about it. Little by little, through the rain on the glass, memories of the afternoon in which the events occurred come to him.

lastly is What will be of me, which is also a love song and is the one that closes the EP. That's our general theme, so we found it timely to release it on February 14th.

In the search for contrast, Jako and Dariel have different styles that they make available to the creative process. While the first is more troubadour and —according to what he says— he gives more importance to the lyrics; the second prioritizes musicality, finding the right melody. With that modus operandi, gave life to this first EP that was recorded at Marquez Music and Mia Records; while the arrangements fell to Yoel Martínez, Yibrán Rivero and the duo themselves. They, although they would have preferred to spend more hours in the studio, say they were satisfied with the tracks chosen, which, they say, are only the starting point since they still have other songs to record.

Why these four songs out of the entire repertoire?

Jako: Because all four are related to each other. In addition, I think they are the most appropriate to make us known.

Dariel: These were also the ones with which we were most satisfied in terms of recording, production and arrangements.

Magazine AM:PM · What will be of me

It is normal in this type of work, and even more so in new bands, to find some collaborations. However, it is notable in Pantomime the absence of featurings. According to Dariel “the initial idea was to make an LP where a couple of collaborations would appear. But in these times it is very difficult to move a 12-song album. It's more convenient to release singles or an EP. In the future we plan to record works where other artists appear, but this time we wanted rather to present the duo”.

What reception do you expect it to have?

Jako: This is a modest job, although we have ambitions to record with a label like Bis Music or Egrem.

Dariel: The album has been independent and sweaty, as I say. We think that at first the reception will be rather discreet, we will only publish it through Telegram and they will listen to it, above all, close friends. Later, when we post it on Spotify and other platforms, it will be able to have more reach, even international.

In the phonogram you can hear a clear heritage of Cuban and foreign music. For which genres does A la 2 move? What sound are you looking for?

Jako: Son, bolero and traditional Cuban music in general mark me a lot. I have always liked Caribbean rhythms. I don't just like them, I sweat them, I make them. Dariel moves through more contemporary genres.

Dariel: The sound we are looking for is the mixture of these two worlds. We want to translate that rhythmic variety of yesteryear to the sonority of these times. I think on this EP we got a bit closer to that, or at least we took the first steps.

How difficult is it to carry out this type of music in a panorama where other genres predominate? Do you feel that there is a lack of space for what A la 2 proposes?

Dariel: It is difficult for us because of the public, not because of the places. Current tastes lean more towards the urban genre. I think it's great that there is such support for the genre, only that sometimes the consumer closes and doesn't listen to anything else.

Jako: Maybe we won't get to make this kind of music ourselves, but we could get to have some collaborations. We could do something with a greater trend towards the urban genre.

How complex can the search for commercial success be without sacrificing quality? Have they come to simplify a verse or a harmonic progression because it is not understandable for all types of audiences?

Jako: Yes, we have had to change verses, even rhythms to make the song more drinkable, to make it more functional.

Dariel: We are trying to make commercially inclined music. We want to detach ourselves from the patterns of the trova or a more thought-out author song, to achieve a more popular product, closer to the tastes of these times. Without losing, of course, the troubadour essence of the duo.

Jako: The lack of time. Live we are accompanied by two other musicians who are in charge of the bass and the cajon. Sometimes, finding free hours where the four of us can rehearse is quite difficult. To perform professionally you must have guaranteed basic needs.

Dariel: We need more organization. For that part, the quarantine helped us to stop for a moment and ask ourselves where we wanted to aim our work, what the sound identity of the group would be. Now we need to outline those ideas and work on them.

And your watermark? What do you think differentiates them from other bands?

Dariel: I think we are identified by the filling of our voices, the color they reach when they come together. Lyrical singing has helped us to have greater control when singing and with it we have achieved a vocal discipline that we lacked before. Perhaps in a few years we will develop another label, but for now I think that the vocal games that we achieve with our tessituras are the essence of the duo.

Jako: It is the plan that we have drawn up and I think it can have a favorable effect. We just have to keep working, that's what it's all about, keep making music. 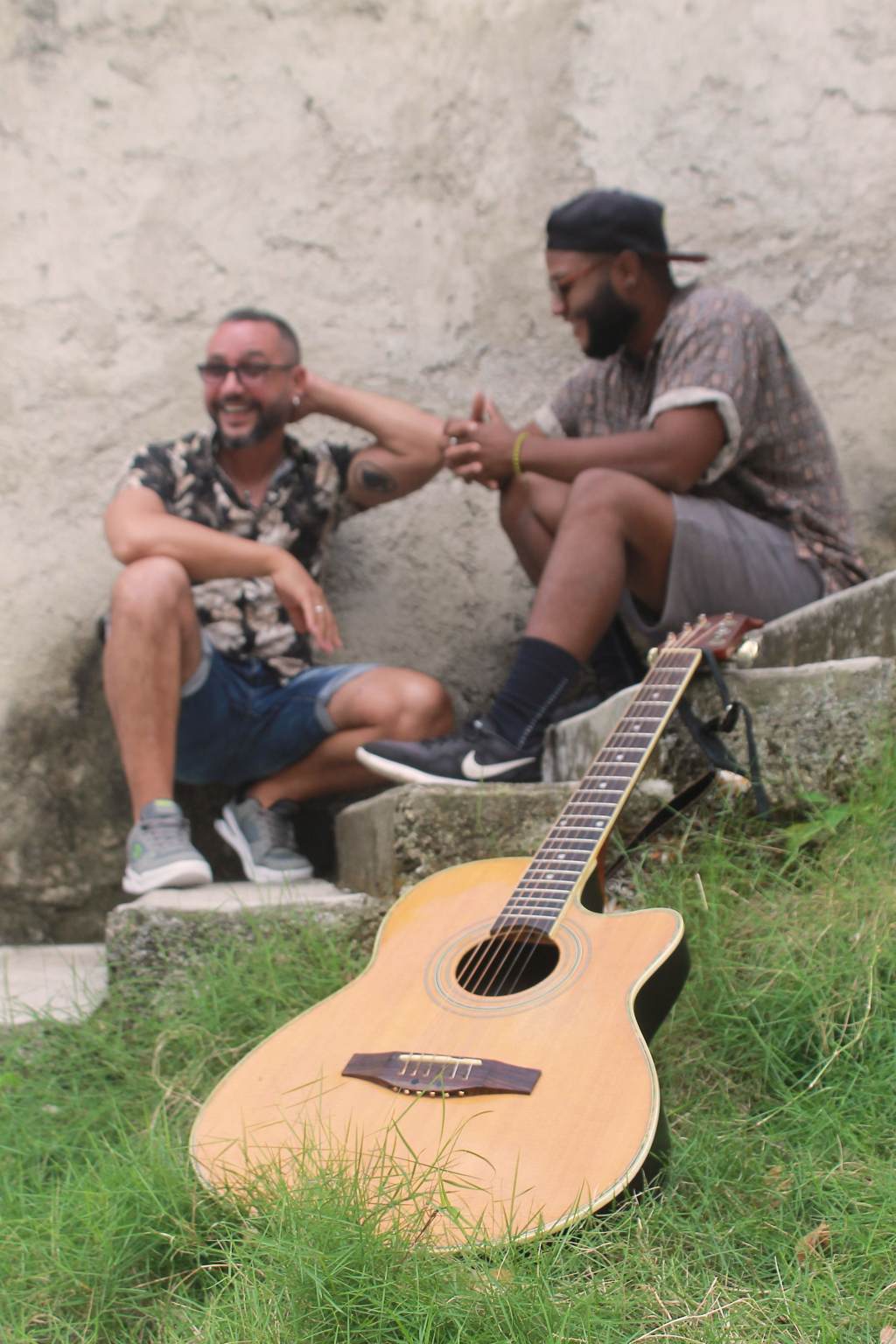 Jako Fedez and Dariel Cabrera make up the duo A la 2. Photo: Courtesy of the artists.

I say goodbye to Jako and Dariel. On the return trip I think of Pantomime. Although it's a nice piece of work to listen to, it borders on the ornamental. Its sound is clear and its arrangements refined, but the songs on the album are complacent with the ear of the average listener. Missing risk. It is music that does not make noise, that does not bother anyone, that sounds like Sunday, ideal to accompany your meal in a restaurant in Old Havana or to fill an afternoon at 23 and M, where the warmth of their voices serves as a soundtrack. to housework, but probably when you turn off the television, you no longer remember who was singing.

Still it seems that this is what works to get high, sound nice and sail on the shore. The songs must be neutral, because the public gets scared if you bring them something out of the basket. A young singer-songwriter might read these lines and think that this is the short cut to being broadcast and televised. But when you arrive at the destination, what will you have done? an ode to family-friendly?

I think of the composers of previous decades and I think of Dariel, telling me that the goal of the group is to translate that sound to these times. Is that the translation you need? Author songs passed through water so that nobody gets indigestible? I reread this last paragraph and I'm afraid I'm being unfair, A la 2 is not a bad group; they have interpretive potential, and this is hardly their first work, but with the color of the voices, it is not enough.

Camilo Marino Empirical harmonica player, collector of sad songs and aspiring poet at the risk of a monogram that says buffoon. Trying to reconcile with the reality as an angel advised me. More posts