From East to West move three fundamental currents: people, revolutions, and music. When someone refers to Santiago as "the most Caribbean city in Cuba", it sounds starchy and half cheesy, but the epithet indicates an incontestable truth. Santiago (and not only the city) is very close to the Antillean cousins, and the short distance makes the sounds inherited from Africa flow better. That's what the documentary is about Bakosó: Afrobeats of Cuba, by the Puerto Rican filmmaker Eli Jacobs-Fantauzzi.

The story is told by Isnay Rodríguez, Dj Jigüe, leader of the independent production company Guámpara Music. In a kind of trip to the seed, the protagonist returns to his native province to find out what is happening there with the urban rhythms. "He and I decided to document the phenomenon, in a way that expresses that our connection to Africa is not just a thing of the past," says Jacobs-Fantauzzi.

The bakosó results from the combination between the azonto, the kuduro, the afrobeat -fashion in the oriental city- and Creole genres such as rumba and conga. This is explained by Ózkaro Delgado, one of his cultores.

However, this new "brand" comes to serve as a pretext to show the vibrant Santiago scene. And it is better that it be so: if we understand creation as an infinite remix, it is better to be careful when putting names.

The common ears will hear perhaps a reguetón 3.0, much richer and musically complex, that "it seems another thing", although it continues saying: "we have money, we have / women to falter", in Maykel's voice The Godfather.

One of the audiovisual's achievements lies in presenting artists and producers underground lecturing about what they do. Candyman, pioneer of the national reggaeton, explains the phenomenon with his rapper's eloquence:

"The santiaguero has a characteristic of assuming music. All the African music, those that are danceable, are very hot: a lot of hip movement, a lot of eroticism, a lot sex appeal (…) When an African music falls here, the Santiago feels like it is his, because that is already within us. ”

This idea coincides with the opinion of the director: "Colonialism has tried to take away our spirituality, our connection with the earth; the food, the music, the culture. Cuba, as a nation, has been able to say that our roots make us who we are, and not only do we not need to hide our African identity, but we can also be proud of it. " 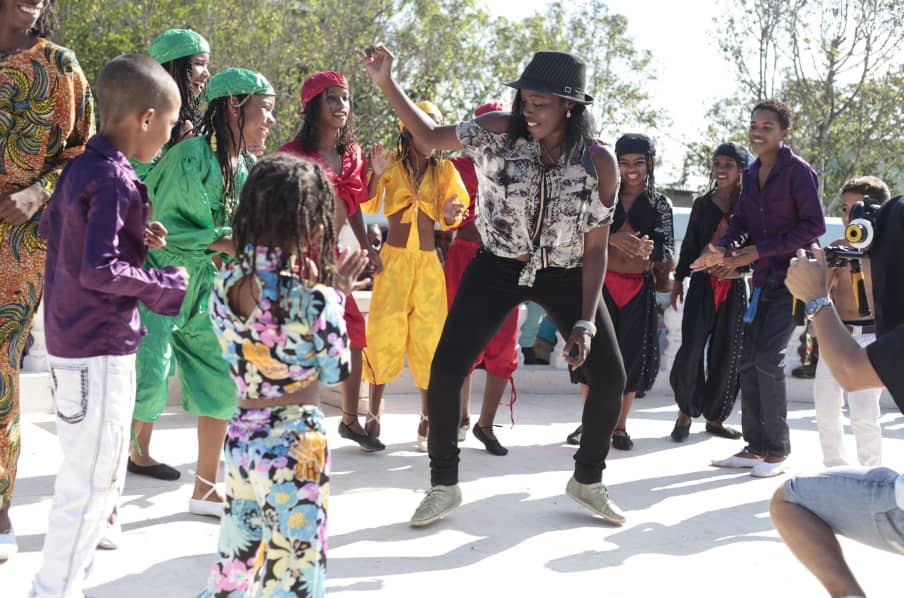 The mixture takes shape, literally, when African medical students also participate in this "contamination" of sounds and dances. Little has been said about the cultural impact generated by the coexistence between Cubans and the different nationalities of the continent, and the approach to this phenomenon is another point for the documentary.

Maybe that's why we can forgive some scenes performed, unhappy, and certain shortcomings of the script. Photography, on the other hand, looks like someone who wants to absorb everything, shows beauty and poverty almost equally. For example, to see the legendary Conga de Los Hoyos under study-unattached to the crowd that is rolling-is something that is not given every day.

Finally, with the sap that he was picking up on the way, Dj Jigüe produces one of those themes that take away the devil's body. Goes to New York, and triumphs.

In Havana perhaps some sounds of bakosó have arrived (nobody said that the trip was fast). The name, much less.

Bakosó: Afrobeats of Cuba, the documentary, deserves applause for putting a face to an area of Cuban music that is not in the schools, nor in the media, nor in the big stages. However, it moves. That's precisely why the mountain should go to Muhammad.

There will be those who comment that it is not something new, but a different way of fusing known rhythms. In this case, Eli Jacobs-Fantauzzi advances part of the answer: "I think it is important to ask: who can define what a genre is and who names it? History shows that that power has gone to Europe and North America. However, all countries have local genres. Will everyone stand the test of time? We do not know, but that's why it's even more fascinating to see the film. "