Archeology (partial and musical) of the Weekly Package

When Magazine AM:PM He suggested that I musically map the Weekly Package and analyze various indicators. I didn't even think about it for half a second: "Yes, we're going to put it in," was my response via WhatsApp. The Package, for those who are not yet aware of it —I am thinking of foreign readers, because I very much doubt that any Cuban man or woman will not know what it is about in 2021—, is a compilation of a terabyte of digital content in different formats and in different manifestations. distributed weekly and on a regular basis offline in Cuba. Through an informal sales network, with different providers, this space has become, at the same time, an alternative content positioning site to the official channels.

When I accepted the invitation - even with that background and being a consumer of the Package—I didn't imagine the avalanche of sounds that awaited me. And it is that I, a music lover and information scientist, could not contain myself and suddenly found myself figuring out how to compile the materials for a whole month: November 2020. The problem: there is not a single Package or a single matrix ( the parent companies are the main suppliers to distributors and currently the best known are Omega and Odisea, which does not mean that they are the only ones). For this reason, doing an analysis of several matrices was interesting but practically unfeasible in the time that was available for the investigation. So I ended up contacting two enterprising students so that every week they copied the musical content that appeared, until I managed to collect 240 gigabytes, which is the total of the sample studied.

For the analysis, I went to Daniel de la Osa, a diplomat whom —as a proud tutor— I called for the most difficult part of the work. Together we went folder by folder and made a huge list with 2,791 items. We include the name of each artist to keep track of their appearances, their gender, country of origin, the language the content was in, the release date, the musical genre, if it was a video clip, an album or a single and the format of each file.

Little by little questions arose: Who are the most visible artists in the Package during November? Which countries are more representative? How is the presence of different musical genres distributed? What types of content are promoted? Is there a balance in the amount of materials generated by male or female artists? From these questions we begin to consider the analysis with an objective perspective, without value judgments.

Along the way we discovered that Abdel La Esencia has a website; that there is a tendency to “beautify” song and folder titles with exclamation marks, commas, parentheses, and any other punctuation marks available on the keyboard; and that there are artists with very striking names like El Kimiko, Curry y Caly, El real y la spiral, El Fonkemio x Life, Pumva, El Maweka and El Lachewe Pa that you know.

Then came some certainties. The organization of the contents responds to two main criteria: categorize and position. The first, essential to ensure that consumers can find the music they are looking for; the second responds to the interest of the distributor in making one content visible over another (the most common thing here is to create subfolders that they name as “Exclusive”). Categories/sections are flexible and vary between dealers; in the analyzed period we found: Awards, Contests, MP3 Discographies, Updated Music, Musicals, Videoclips and Concerts.

To tabulate the presence of artists, we were guided only by the main one, which represented an obstacle in the analysis since we had to discard the information on secondary or guest artists. Also, the proposed data structure sought to measure representativeness, not to map collaboration networks between artists (invitation for future works included here). Likewise, given the non-existence of the Artists who declare themselves transgender in the Package and the insolvency on our part to apply other tools that would generate a more complete analysis in this sense, we apologize for the bias that the use of a binary criterion implies.

After finishing the data collection, we proceeded to count and add to get the answers we were looking for. In general terms, it could be anticipated that a very significant percentage found Cuban music (reggaeton) made by men. The music, a good part of it, is produced in Miami (this statistic is not verifiable in the results, but viewing the video clips allowed us to identify it). At the end, as a sample button of gender inequality, we place the 10 most visible artists in the month studied. The result was not very far from the predictable. Only one woman (Becky G) among nine men.

Other crossings and analyzes would be possible and desirable, but these are enough to give us a general idea of the music that reaches the headphones of Cuban men and women, probably through the most massive route that content distribution in Cuba knows today. 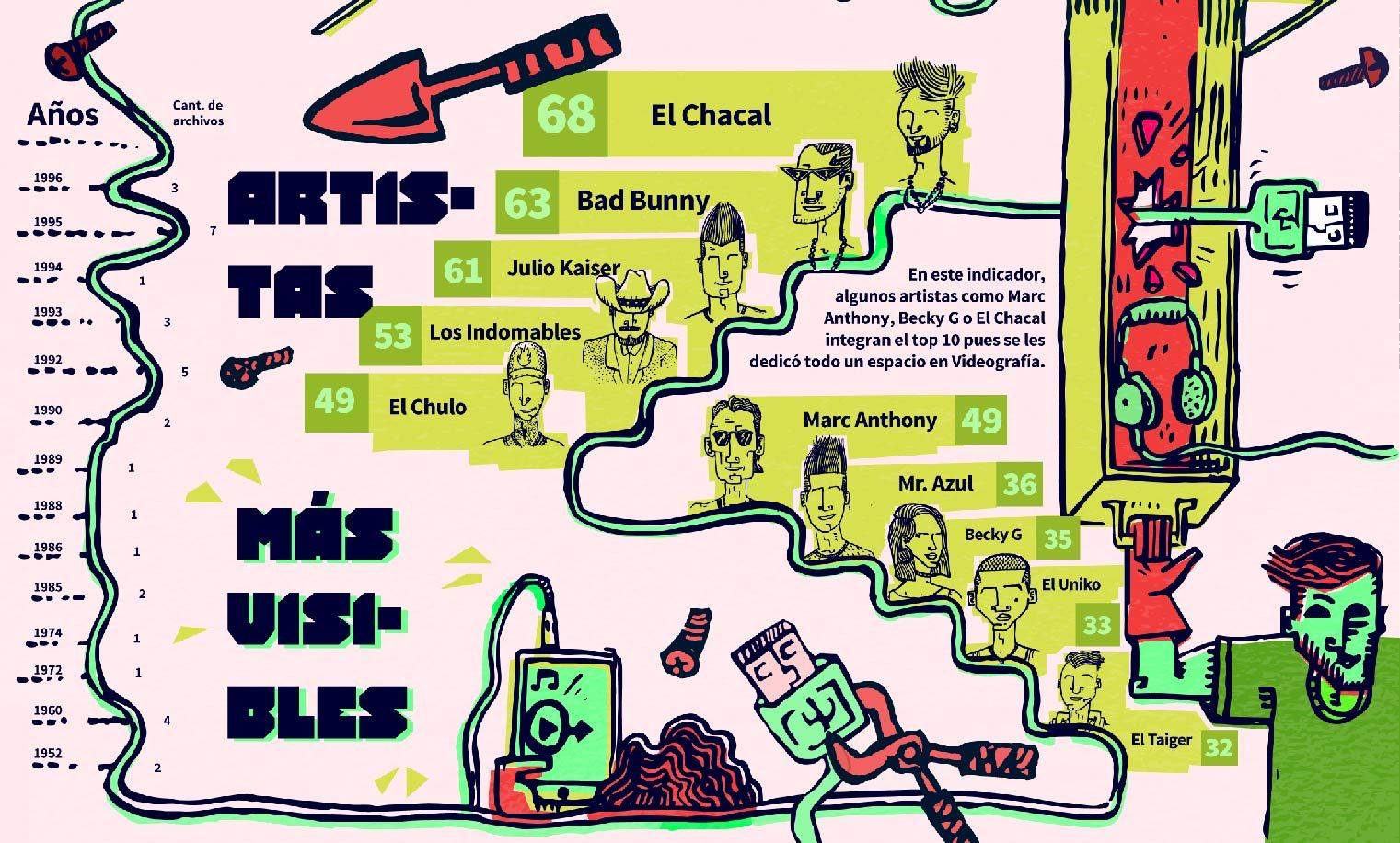