To "guarachear" with the "reparto"

A few days ago, in the middle of a meeting between friends, someone would throw a question on the air: "Have you thought about what topic we would talk about if reggaeton did not exist?", A commentary that passed without sorrow or glories. Interestingly, the next two hours we spent talking about the distribution version of Fool by Silvio Rodríguez made by Chocolate, commenting on how in the elementary school where my sister studies Prisoner stick in the lunch hour, and analyzing some of the videos reviews of The Package that we find "nice".

Regardless of age, cultural level or social position, arguing about the issue has become a common practice among neighbors, friends and even strangers. For or against, the truth is that everyone has an opinion about the delivery reggaeton, and it is natural. The music or musical expressions framed in the urban scene have always been characterized as a controversial issue, both among the public that consumes them, and among the exponents who defend it. And in Cuba they have not been the exception.

From rap to reggaeton, the genres of urban music have been a source of bewilderment for many. The ability to mutate these expressions and the use and development of digital platforms as their main means of promotion and dissemination have revolutionized the current sound reality, with an impact on the practice of the rest of popular music.

Among the urban expressions present today in our country, there is one that is already part of the soundtrack of the nation, despite the attempts to ignore it by many cultural institutions. Who has not had the luck (or misfortune, according to the taste) of listening in an almendrón the subjects Divine Palon I and II, of the well-known Chocolate MC, or be received upon arrival at a cafeteria or any neighbor's party Inmate stick or Pa’ que guarachee Santa Claus, from KNM (Kokito, Negrito, Manu Manu). Preferences aside, the reggaeton repartero, raggamorfa or reparterismo, as you want to call it, is one of the most consumed local styles of urban music, and today marks a trend within Cuban society. 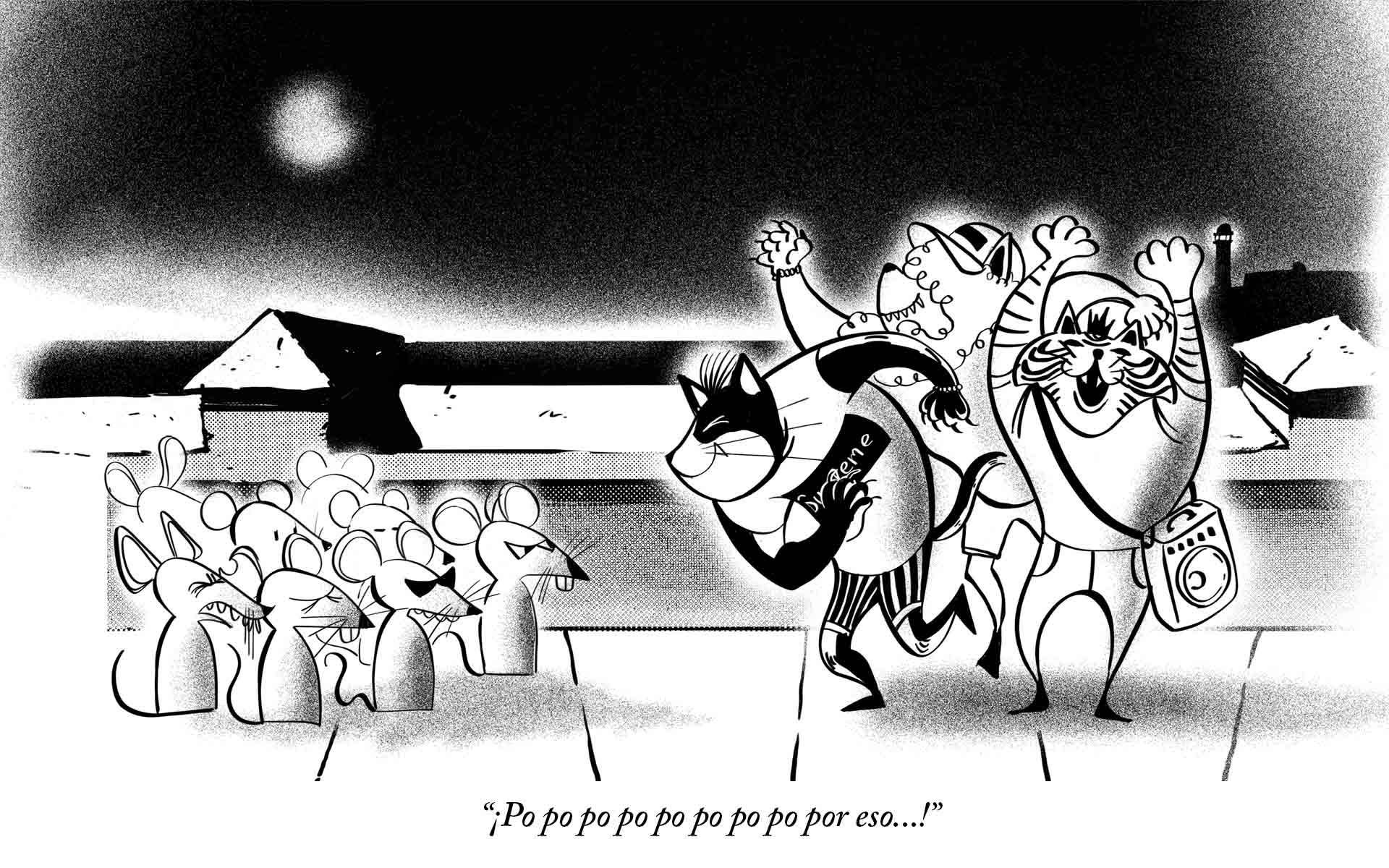 For many, it is difficult to understand how in such a short time this type of music has managed to position itself in such a strong way in the preference of the Cuban public (mostly the young audience). Whether due to the aggressiveness of its texts, the vulgarity of its lyrics, the basic musical composition or the marginal aesthetics defended to a greater extent by its main exponents, the truth is that an important part of the Cuban public (including musicians or artists) that defend another type of sound creation) has developed a kind of phobia or repulsion to the delivery reggaeton. Even so, and in spite of the constant criticism by the decision-making institutions of cultural policy, of prominent Cuban musicians and even of a large percentage of the population of the island, the production of this type of music is increasing every time her, her popularity and consumption; so it is extremely important at least to try to understand the reason for its acceptance.

How is it that a type of music with so many detractors manages to stay in the public's preference? Are there links with our popular / traditional music? Is it simply banal, basic, easy music or perhaps it responds to a complex social framework that justifies its consumption and sustains its creation? Do you have anything to contribute to the rest of the Cuban musical creation?

It is time to open ourselves to new sound possibilities and allow us to dialogue with these forms of popular expression.

One way to approach the dynamics of this proposal without prejudice is to rely on the criterion of Danilo Orozco, for whom the creation, development and sedimentation of any gender has to do with two aspects: 1) the characteristics of social reality, and 2) the needs of a group of people to express their most immediate reality through music.

Because it is a distinctly popular style, gestated and developed from the empirical knowledge of its creators, it is very difficult to establish denominations that explain the phenomenon in a more "academic" way. Even so, it is possible to notice the existence of a base structure for all the production of reggaetón repartero, where the order of the parts can vary, but never the parts per se.

Another aspect that is attractive is the ability of reparterismo for the assimilation of distinctive features of other genres, while other expressions of Cuban popular music assume elements of the reggaetón repartero for themselves.

In this scenario of open borders, with mobile thresholds, as the aforementioned Orozco would say, it is increasingly common to find a choir repair within a theme of popular music (Bajanda, The guachineo, I dreamed, etc.). Likewise, we find productions of the reggaetón repartero in which Cuban tumbaos already appear, at the same time as there are glimpses of melodic designs in charge of the metals, remembering the mambos of genres like the timba.

Since 2010 a new way of doing within the reggaeton has begun to develop, which is a bit out of keeping with the consolidated models so far with themes such as The Campismo (aka Parapapampa), of chocolate. However, it is not until the most recent appearance of The divine Palon I, of Chocolate himself, that we can speak of the proper distribution within Cuban music. It is with this song that the stylistic features of this expression are established at a sound, textual and aesthetic level.

This was followed by topics as popular as Divine Palon II, from the same Chocolate, (who has established himself as the main exponent of the reggaeton reggaeton) or Prisoner stick of KNM, among many others.

In them, beyond the sticky and interesting rhythmic relationships that are established between elements such as the bass drum, bass and hi hat (the latter is almost always replaced by slaps), which indisputably draws attention is the explicit sexuality of their texts, for many the most distinctive feature of this generic type and in turn, the main generator of rejection.

To some extent it is understandable that such texts overshadow any other value judgment. The repeated vulgarity in the lyrics of a large number of the works produced generalized the idea that for a song to be truly a part, it must be obscene. This encourages a good part of listeners predisposition and rejection, depriving us of being able to see the other side of the coin, denying the possibility that there are other elements that characterize this type of creation and establish links with Cuban popular music. In addition, we turn our backs on a part of the repartimiento creation that, although it uses a common, popular street language, does not contain aggressive or offensive content.

By referring to issues such as Pa that guarachee Santa Claus or I wish I could, of Kokito-Negrito-Manu Manu, we can appreciate the existence of a type of text that, although it is not of the most poetic, does not pay attention precisely to the moral values ​​of Cuban society.

Here the rhythmic element is the main feature of identity. The key of guaguancó made by the claps as opposed to the bass drum, which sometimes accentuates each beat of the beat, is very tasty while in others they send the listener to the polyrhythm executed by the catá in a rumba set, exposing nexuses undeniable between the reggaeton repartero and the most genuine Cuban popular music. There are hidden some of the causes of the magnetism that this type of music exerts on the public.

Another element of attraction is the melodic design. Moving on totally predictable and familiar harmonic environments for the listener, the melodies of the songs repas are designed from joint movement, reiterations of notes and intervals of thirds and fifths to a greater extent, making it easy to memorize and identify them.

And since we are taking the blow, under this look, let's also put language. Putting aside the vulgarities, the delivery reggaeton uses a vocabulary that is close to the average listener of this type of music. The use of said dawns characteristic of the common Cuban, the typical chabacanería of the neighborhood, the daily themes, approached from the total carelessness and from the lack of filter, becomes attractive for young people who assume these characteristics as a synonym of rebellion.

With all its courses and despite all its contradictions, the reggaeton repartero is consolidated as one of the most popular urban styles in the country, with numerous and growing communicating vessels with the rest of Cuban popular music. Assuming it as part of our popular expressions can be a difficult task for many to assimilate, but turning away would be crazy.