In June 2017 AM-PM "America for its music" event, organized for the third time by Fábrica de Arte Cubano, decided to bring together some of the most outstanding musical producers of the continent with the intention of sharing and debating with their peers about the main regularities, concerns, and trends of the profession.

As part of that meeting, AM-PM commissioned a group of interviews to several of the essential musical producers of Latin America, which were published as a dossier in the Spanish magazine Zona de Obras and which we are now starting to reproduce in our magazine, with the intention to continue spreading the musical thought of these "monsters".

Juancho Valencia does not pose as a divo. Answer calls directly or call yourself, adjust your schedule to the needs of others, listen when you speak. He does not pose for divo even though he has all the ingredients for it - he's talented, handsome and almost famous. In the last two years alone, he has won a Latin Grammy for a production of classical music, Radio Nacional de Colombia designated him Artist of the Year and merited the Order of Merit of the Council of Medellín, which upon receiving the recognition considered: "his talent is admired throughout the world and his influence on Colombian music is undeniable. "

Leader of Merlín Producciones, a music production, artistic and event management company, and Puerto Candelaria, the band that has revolutionized independent Colombian music; Juancho is the musical producer who has accompanied successes of artists such as Calle 13, Chocquibtown, Maité Hontelé, Oscar de León and Crew Peligrosos. But he is so immersed in enjoying the creative process that he does not have time to think of himself as a figure.

Music is your other home. When he was twelve years old he played solos by Thelonious Monk, and at home he welcomed the great collector and researcher from Antioquia, Cesar Pagano, and Chucho Valdés (they did not call him "the Cuban embassy"). He has spent almost two decades doing almost everything that is possible to do (compose, arrange, record, produce, direct, play) in the Colombian independent music circuit. With such a pedigree, two conclusions emerge immediately: that he was born "touched" with a kind of predestination to guide and universalize, from the regional, a good part of the music of his country and our continent, and that this immense responsibility is " He said "very young, because this mulatto with curly hair and eyes that want to eat life, does not reach 40 years.

In a Havana more rainy than usual and avoiding the pitfalls of his infernal agenda, Cristal Cristal beer, we made this interrogation concrete.

Who is Juancho Valencia and who is El Sargento Beetlacha? Where does one end and the other begin?

What do you think has happened in the Colombian alternative scene of recent years that has made it be considered the hub of the music of the continent? This music of which you are one of the indisputable protagonists, with respect to which other is alternative?

We call alternative music to the musical manifestations that do not meet or do not conform to the needs and requests of the market of their region, in contrast to the badly called commercial music, which has not only talent but big bets and economic investments, and whose purpose is to generate an economic transaction, but not to transmit an artistic or cultural proposal.

In this sense, Colombia is experiencing a positive and indisputable moment in world music, from commercial pop, alternative, jazz, classical music, electronic music, salsa, urban, an unprecedented achievement in our country. What people do not know is the work that has been behind the most obvious thing that musicians are, but that for different reasons came into synch with the national and regional government, private enterprise, private and independent media, universities , the music schools in the lower strata; all this complex gear working in an era (20 years) post-conflict of the narco war. And the musicians with determination, love for the local, strengthening of self-management, professionalization and formalization, technological and academic development, managed to "turn the cake" and put Colombia in the first places of Latin music consumption and production.

You said in an interview about Merlin Productions that it is a label, a label, an event producer, a space to change our society from art and creativity. What changes did you dream for the Colombian society Merlin Producciones when it was created (in the year 2000) and what do you think it has helped to promote?

Merlin Productions has managed to restore the confidence of the local artist, to see that it is possible, that it is not necessary to escape from the country to achieve its mission, that it is possible to make music and be profitable without renouncing your musical ideals. We have shown that if the opportunities do not come, one must create them, that you can work in the middle of entertainment without being involved in corruption or the mafias that dominate the sector, that if they ask us illegal money to sound on the radio, we avoid it and we look for different alternatives. Our work is to transform the imaginary of our society through art, to work with artists with social, environmental awareness, and who are not interested in having or showing the most luxurious car or a speculative image totally dangerous for our fragile society.

Merlin is a Latin American reference for cultural management as a creative company, and that makes the impact of this initiative as important as the music we produce. We happily say it: the greatest rebellious act of us as artists was to have built a company. 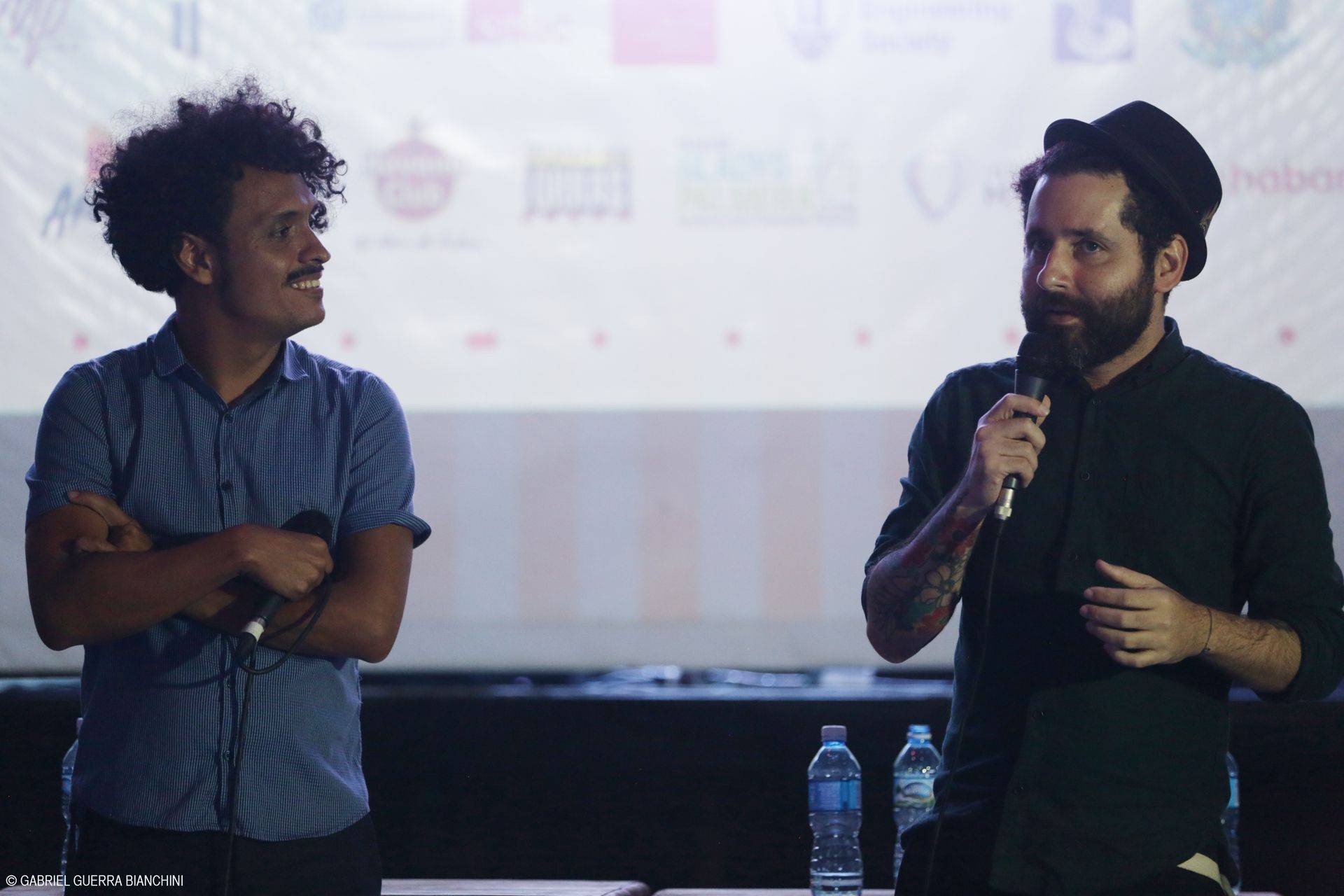 How does your love story begin with Cuban music? What are you doing that you're spending so much time in Cuba lately?

My romance with Cuba starts from my father, an architect and musicologist who was one of the most important collectors of salsa, Afro-Caribbean and Colombian music in the country, with a love and special emphasis on the Island. He pioneered the music video collections ; for this reason I am graciously saying that my house, my childhood home, was the Youtube of the 80s, where national and international musicians, music lovers, journalists and simple onlookers, traveled to see on the move - through the television - the artists that they listened to Because of those gatherings, they interrupted my childhood nights like Celina González, Chucho Valdés, Omara Portuondo, Andrés Hernández de Son 14, Irakere, among other Cuban, Puerto Rican and Colombian legends of Latin music. So I conclude that my love for the Cuban sound comes almost by inheritance, and it goes without saying that Medellín, my city, has been the global epicenter of traditional Cuban consumption, as well as being the global epicenter of tango dancing as well.

In my university years (1998-2000), I traveled the island with the spirit of learning and they were definitive years in my training. I got involved with young people of that time who are now renowned artists of Cuban music, and I return to Cuba ten years later as a pianist at the II Encuentro de Pianistas Populares and as a musical producer of Maite Hontelé, an adventure that ends or -better- begins with the production Cuba Linda. This is, as far as I know, the first alliance between a Colombian label (Merlín Producciones) and the EGREM of Cuba, a project with many expectations that will give a lot to talk about. The public here is awaiting the merger that will be made with the Colombian sauce in this magnificent adventure and will receive it as a tribute to the importance that Cuban music has had and has in our country.

You have co-produced with your countryman Ernesto Santos, with Gerry Rosado de Intolerancia, Mexico, with Eduardo Cabra of Puerto Rico, and now with Alain Pérez de Cuba. What is special about collaborating with these colleagues? What does it give you?

With these powerful people I have worked in different ways, in projects with very different sonorities and musical styles, but each one from their work, has taught me. I have been a wise student of all of them; So, although sometimes we work and share high-level responsibilities, I always see them as teachers who teach me. All you name, and have very different sonorities in their ears, all absolutely all, are governed by the responsibility of good music, commitment to their culture and society, discipline, quality and the way they are delivered to his profession with such a commitment that even his personal lives - like mine - wobble ... (laughs)

What do you expect from the Meeting of Latin American Producers in AM-PM?

The mere fact of the initiative of AM-PM to meet everyone in a meeting, is already an achievement, a historical fact; AM-PM is clear that the only way to face the modern challenges of music is to be in communion with Latin America, to share our solutions and frustrations. The other element, perhaps invisible at first sight, is that all the invited producers have been strongly influenced in different ways by Cuba in their careers, and we all agree on the current challenge facing the Island and the future of its musical wealth in a artistic environment that not even the most creative of the dystopians could foresee. (Smiles with some bitterness)

My main expectation is simple: solidify the coalition of Latin alternative music and that Cuba, just for a moment, stop looking to the north and look to the south.