Jesús Pupo: "Music always lets you see the creator and his intentions"

I like records where the music just is; where there are no lyrics that overload the strength of the melodies, and this becomes the first voice. So it happens in Prayed, album by pianist Jesús Pupo that was recently released under the Egrem label. An album designed and recorded, in jazz-band, with a list of 23 musicians. All colossal. An anthology, according to its creator, through the music of the Gold process and (...) of the people. A process where changes go through us until we obtain a better version of ourselves, as human beings, as creatures of God.

This phonogram has accompanied me, lately, while I was touring the city, on sunny, humid days, in the gray hours. In each of those moments I also traveled through music, I went through places I had forgotten, I healed, I reconciled, I was reborn. A reunion with my spirituality from the spirituality of Jesús Pupo and the rest of the musicians involved in each piece. An album as refuge and reflection. A ray of light, in the bits of gold —no longer colloids— that make it up.

For that trip, I decided to talk to the pianist. Along the way, Danay Suárez — singer, rapper, executive producer of the album, and life partner of Pupo — also intervenes. I am searching, perhaps, for those processes that led them to weave the threads that run through this work.

when did you decide that the piano is the instrument through which you prefer to express yourself? Why?

When I was about three years old I visited the house of a neighbor of my grandparents in the countryside and there was an upright piano, a little out of tune, but it was a unique encounter; I still remember the smell of that wood. Since I was little I was attracted by music, rhythm and the sounds of instruments, everyday life and nature. From then on I knew that the piano would be one of my means of expression, my interpreter and language.

Why Prayed? Why that name for the album?

Jesus Pupo: The intention was to make an analogy between the life of the human being and mineral processes, their violent transformation into precious stones or materials of great value such as gold. The goldsmith polishes the gold and the jewel until he sees himself reflected in it. Likewise, man undergoes the process at different moments of life until he reflects the image and likeness of his Creator, until he sees two things: his true value and the purpose of living.

What distinguishes this production from the previous ones?

I brought all the sounds and musical styles to the same scene: from traditional Cuban music, contemporary classical music, rock, jazz, ballads, new age and the song. I managed to get all of them to live together and form part of a work without labels or paradigms. Prayed it is a liberating album, in its essence.

Is the whole album an immersion in your moods? Is that how you conceived it? Why this attachment to spirituality?

Mood, emotions, and spirituality represent the trinity of the human makeup; soul, body and spirit. It is not that I am attached to spirituality, but that all understanding is always more limited than the source of inspiration and creative power that is in my spirit and my faith. 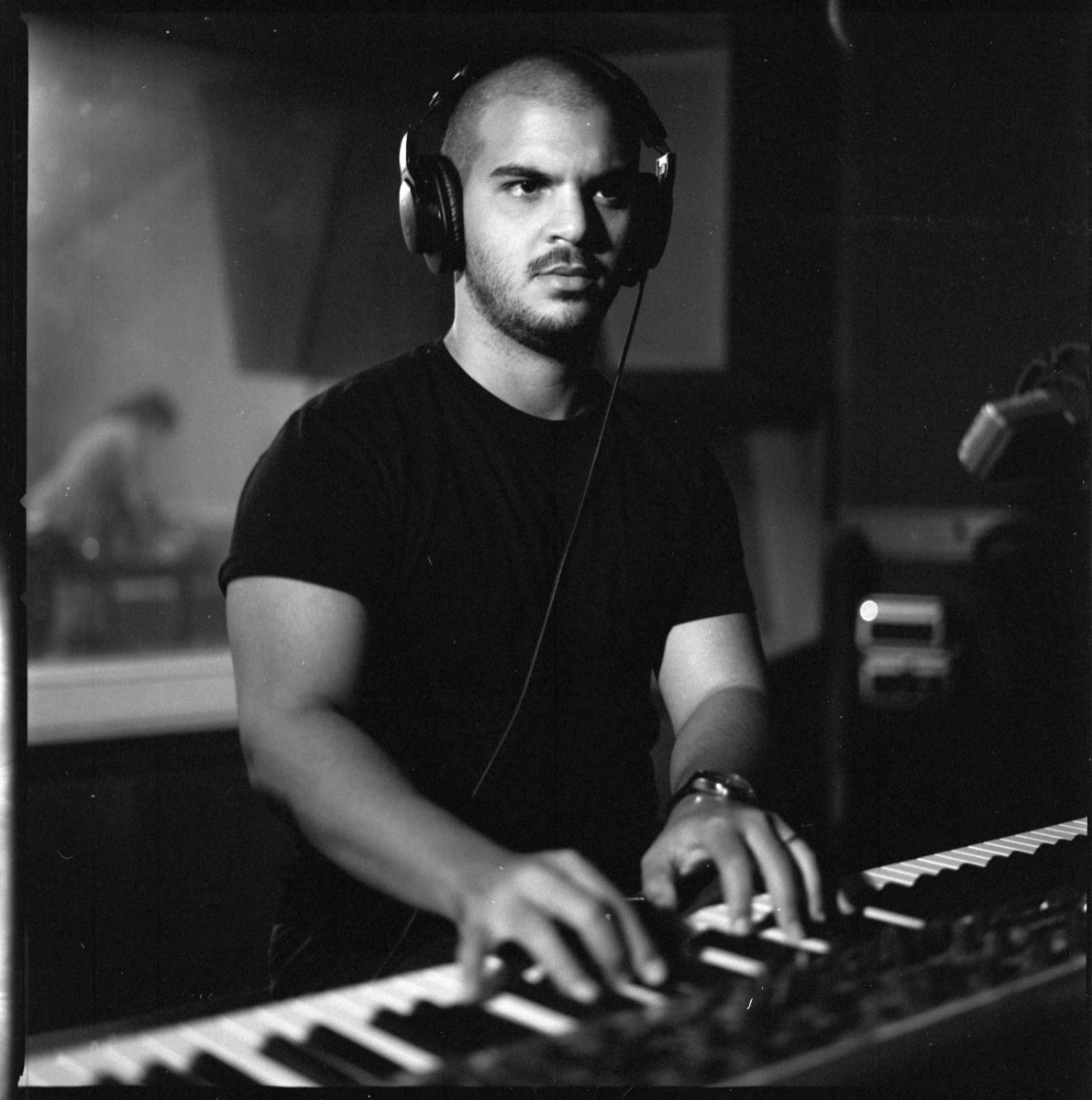 Let's get a little closer to the creative process of the album. How did the idea come about? How did the recording process go? What does each of the musicians who accompanied you contribute?

One afternoon in Old Havana, while having lunch with Elsida González, from Egrem, he commented on the idea of making great original works in the format of  jazz-band. Our next appointment was to listen to some demos that he had already developed. The opportunity arose and I did not hesitate to call the engineers Raúl Varona and Daelsis Pena —with whom I had already had experiences making recordings of this type— to look for a specific sound.

The musicians were intentionally chosen for their color in sound and character in playing. The first days we got to assemble the bases of the trio songs, bass and double bass, drums, pianos and keyboards; we spent hours reviewing the scores while in the booth they tested the position of the microphones. But those were not the most complex days musically. The entire performance of the album had a high level of complexity and technicality, and I know that every player is proud of the end result. Do Prayed It was not easy. We demand and polish ourselves to the maximum in each interpretive moment. Everything was collected in an audiovisual that will come out little by little. The cameras did not have a specific direction, they were capturing everything as it happened and that was the idea: keep material that speaks for itself and that can be seen on my channels on the platforms of streaming.

What challenges involved the overall production?

The biggest challenge for everyone was achieving the sound concept, sound placement, mastering, aesthetics and interpretation. Sometimes we tend to play with a certain sound, depending on the musical style and, as I already mentioned, there are many styles in each song; so defining a sonority was the most difficult. It was a super challenge to organize a team of more than 40 people between musicians, production and cameras, all of different ages and everyday situations. Intermittently the studio had to close due to covid-19 infections and that challenged us in terms of planning. However, I wouldn't change a thing. Prayed it is a necessary album in Cuba and necessary for me.

What did it mean that Danay Suárez accompanied you from the executive production?

Danay is a woman who overcomes any challenge. I don't think all of this would have been possible without her. Those were difficult and scarce times, where finding something was not easy even with financial resources. The covid-19 was violent and the situation in the country, plus the confinement, made everything very complex. Danay stepped into the role of executive producer like no one else at the time.

This question is for Danay. I would like to know how the experience in this role was for you. Satisfactions? What would you change?

Danny Suarez: I have some experience recording albums and I know the attention and respect that should be given to the musician and the work team; It is the same that I demand for myself. That is why I was passionate about the whole project and I did the procedures with the excellence it deserved, regardless of the fact that in Cuba they are carried out under extraordinary conditions. I was able to view this album. I believed and believe in this music, and in the greatness that it carries within. The challenge for me, in this case, was having the honor of participating in an album that honors his name: Prayed. It's not every day that I find opportunities where I can honestly say I've gone to another level of personal fulfillment. I wouldn't change a thing, my chances to change something came while I was singing the song In you and produced in this wonderful project. I am aware that we have a time to do things and that time does not come back.

Let's dive into some of the songs on the album. Prayed, the homonymous theme, bursts in and does so not at the beginning, but on the eighth track. Why?

Jesus Pupo: The order is due to the chronology of events that I experienced in my life and in the stages that I understood each of the processes that I faced. No song could move from its position because it would alter the timeline of my own history. The album is a script that has a beginning, a development, and leaves the way open for the next thing that I am going to create as an author.

Trends refers to the continued and excessive exposure of "role models" that are presented to us and their influence on us. As an alternative, recommends vision and courage to maintain authenticity and freedom. Tell me what are those other concerns towards which you direct your gaze and how they are present in your creation.

If I don't find authenticity and honesty in a work, it bothers me. I believe that overcoming and demanding must always be in a creator, who must find the balance so as not to be vain. Music always reveals the creator and his intentions.

Bolero a thousand sorrows It is the second musical piece of this phonogram. This genus has been widely cultivated in our country. Why was it necessary for you to include it?

a thousand sorrows within the album has the intention of redeeming the lack of love that most boleros carry. It is the only composition that is not my own, but its strength made me change my perspective of the original intention of the composer [Juan Pablo Miranda] and I assumed it as a song of self-love.

In you It is a song that you share with Danay Suárez in the composition (melody and lyrics). Could it be said that it is a song dedicated to both? A theme that talks about the relationship they have?

At release of the press it is announced that Prayed is an ideal album for a film soundtrack due to the programmatic nature of the work. What is the reason for this cinematographic projection?

In fact, one of the places I'm heading is toward creating for film. In my music I try to approach emotions that generate images and the connection with the seventh art is essential to complement it. Also, I have always been captivated by soundtracks and composers who have left scenes and songs in my memory. It's something that I love.

Throughout the phonogram the piano is present, of course. But I realize that there is a strong presence of brass (a lot of sax, trumpet, trombone). Did you have any intention marked with this?

Each instrument has its own voice and each format its magic. I used the format jazz-band, but turning to typical genres of this format such as the bolero of the 50s. The traditional string quartet is one of the most interesting since it is the root of symphonic orchestration. Having all this range of sounds together, plus the analog synths and colors of electronics, the sonic richness is wonderful. The intention, in the end, was to make music.

Mirian Delgado Diaz Music lover who dreams of vinyl records that she sometimes finds and sometimes not. More posts

Adriana Orejuela and the gifts of the search