The house dog, a Pekingese named Hillary, dozes on a guitar case as if nothing was happening around her. There, in a small apartment in El Vedado, the rehearsal is going on, as it does every Tuesday, Thursday, and Saturday —as long as there is no work—.

In a pause, without letting go of the violin, Adyany Isalgué prints scores, distributes them, and they start again. Three months ago, after things did not work out in another group, she and several members decided to become independent and formed El Mariachi de mi Tierra. They called him that in honor of the band that accompanied the Mexican Juan Gabriel for much of his career.

The first notes of As the flower, by Selena, a song that has hardly been played in the activities, but someone has suggested incorporating it so that people dance. “We do choreography and everything in the works”, says Adyany, enthusiastic. Somehow, the theme closes turned into a mambo.

And it is not uncommon for other genres to be mixed; on the contrary. “We have come to touch Speak killer  -bill-. In fact, it happened to us recently when we reached about fifteen, and from outside they told us: 'you sing me two ranchera songs, but what I want is El Negrito and El Kokito'. And at that time you have to please them... within what is possible, there are always limits. We have also made Cuban music, because in the end we are a Cuban mariachi”.

As they all come from art schools, traditional themes are familiar to them, adds Nelsa Pérez, singer. Although the list is thought before, it is usually modified according to the wishes of the client.

If they are asked for a song that they do not master, then they improvise; then they put it on in the next rehearsal, and thus they expand the repertoire. These requests represent “unconscious help” from people, says Adyany, because the next time someone wants such a piece, they will be ready.

However, certain guidelines prevail: when they go to a birthday, they cannot miss The Morningyes; if it is a marriage anniversary, romantic songs. Themes dedicated to mothers or grandmothers are also a constant. When there are children in the family they have even played children's music, like some songs from the soundtrack of the movie Coco.

Who likes corridos and huapangos? What are the audiences of these genres? Miguel Barreras founded Mariachi Habana almost 20 years ago, and he does not hesitate to answer: "From the tip of Maisí to Cabo de San Antonio, the mariachi fascinates everyone." Also in Europe, he affirms, and in Latin America above all; even in Lebanon, where he toured before creating his group, he says.

According to Miguel, the mariachi lends itself to everything: quinces, weddings, serenades, saint's parties, to receive a family member who comes on a trip... "We have even gone to wakes at the funeral home, at churches… we have even gone to the cemetery to play”.

On the wall of the room hangs a photo, as long as open arms, in which the members of the band smile. "No, no, those are no longer here: from that picket line that you see there we remain three, all the others have left, they are in different countries." The Dominican Republic, Australia, the United States... His son Miguelito, guitarist, guitar player and vihuelist also lives there.

The pride with which he refers to his work turns into severe criticism in the face of what he calls "deformations" in this field. To begin with, he does not agree that there is Mariachi School, in Granma. The institution was inaugurated in 2005, and two years later it had its first promotion, with 120 graduates, who would form respective mariachis for 12 of the 13 municipalities of Granma (except Bayamo).

“That does not fulfill any objective: that is to elementary prepare a musician, like that, and then release him so that (he) invents his life”. He insists on the same idea: “School, as such, is the academy that all musicians study in Cuba; music is one”.

He talks about “clandestine”, “illegal” groups, which are not registered in any artistic company. To these he attributes a certain lack of luster in the trade. "The economic situation has resulted in everyone wanting to form a group," he stresses.

The director, who was also a violinist for the veteran Mariachi Cuba in Santiago, explains that a group can function with at least eight members. However, several classified ads promote groups that accommodate their staff to five or three musicians, depending on the possibilities of the client. “The less we are, the more we earn; that is an economic problem”. There are even cases where a single person wears the typical costume and sings using backgrounds, or just the guitar.

Miguel prefers presentations for individuals rather than concerts, as they are too cumbersome. Even so, Mariachi Habana came on stage for two nights at the San Remo Music Awards festival, accompanying two international guests.

People - of course - get drunk on the sentimentality of the old refrains: Blame me for what happens... But I'm still the King... And then I'll turn around...

It will be that it does not change that of being in the same city and with the same people, and that custom is stronger than love. 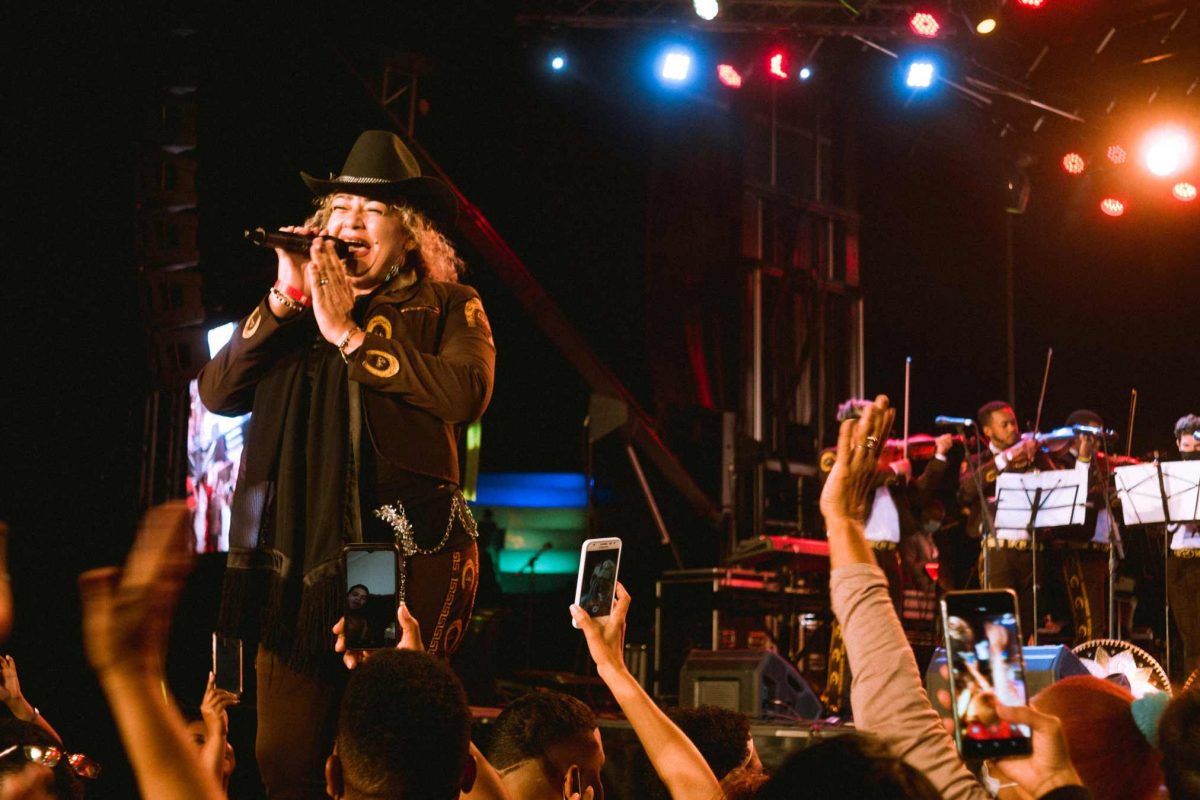 Daniel Enrique Pérez sang in trios before studying at the University of Informatics Sciences (UCI), where he graduated in 2013. Later, for about five or six years, he carried out both occupations: by day, an engineer in a software company ; by night, Mexican music singer.

Today he identifies himself as CEO and founder of Havana Mariachi, “official site of Mariachis throughout Cuba”. The website, developed by himself during the pandemic, allows reservations and information about the service. The name is due to positioning issues on-line, so that it appears among the first results when someone searches the Internet for “mariachis in Cuba” or in Havana.

In addition to private activities, the band Daniel Enrique and his Mariachi Cuba Nueva Era has frequent performances at state sites such as La Giraldilla, el 1830 and La Rueda. Eventually they attended performances in Mayabeque, Artemisa and Pinar del Río; going further became very expensive. So the director tracked down the “head” groups from other provinces and talked to them about creating the National Mariachi Network.

Customers turn to him, and he in turn links them to musicians in a certain territory. “Everyone thinks that if I give someone the job (they charge) a commission. Nerd; that is to help, it is a network that we have, all the directors are there”, says Daniel. Although he mentions the Mariachi Tunas, the Princes of Guadalupe (Varadero), the Mariachi Holguín, the Coyotes of Matanzas… in the web page names or contacts of the groups that compose it do not appear.

With the reopening in recent months they have taken many reservations. People were crazy for party. However, for Daniel this is also explained by the increase in wages: as people earn more, and they did not raise prices as much, "now everyone can enjoy Mexican music."

That Friday afternoon, minutes before they arrived at the wedding, the atmosphere was happy, rather calm. The family took photos. A Pinterest decoration occupied the patio: garlands of lights, curtains, flowers, candles, paper lanterns...

The accordion and trumpet sounded from the doorway, and instantly a semicircle swirled. The bride and groom, surprised, danced in the center. Guests were humming and clapping, no one sitting still. There were five musicians (the boss was not there). Only two smiled. In the end, someone asked them Speak killer, but they were already leaving and did not touch her.

Over there, danzón, bolero, Dámaso Pérez Prado, Benny Moré… Over here, Pedro Vargas, Tin Tan, melodramas… The fondness for rancheras and corridos is woven into that dense fiber that unites the popular cultures of Cuba and Mexico.

When Adyany Isalgué was nine or ten years old, her great-aunt Mabel put on the telenovela Mariachi's daughter: "I was a fan of that novel," she confesses. That's where the dream of working in one of these groups began. Although there is rivalry, he acknowledges having run into mariachis that have opened doors for him.

Meanwhile, the walls are never lacking, such as the impossibility of acquiring suits, hats and ropes. “Nobody provides that for you,” he maintains. Transportation is no less complicated, because when the drivers agree to move a mariachi they immediately think of a lot of money, and end up charging more than each musician.

That is why on occasions they have moved to a point close to the place of the activity —each one by their means—, and from there they arrive together. People notice when they see them dressed like this on the street. “I've been stopped a bunch of times: 'oh, let me take a picture with you,'” says Nelsa Pérez. “You walk and you rise”, confirms Frank Sosa, also a singer and medical student.

These three months feel long: only last Mother's Day they had about 14 presentations, from eight in the morning until one in the morning. They avoid playing with a lesser member, to maintain the musical quality and empathy between them.

Adyany has a violin tattooed on her left wrist. He knows what he wants now and in a few years. "The aspiration is to try to get as close as possible to the great mariachis of Mexico, who are the reference... Nothing, always from humility and knowing that Mexico is Mexico."