Were there queens from the vitrola in Cuba?

They were two; The first to wear the crown of that reign was, of course, Olga Guillot.

Although he was born in Santiago de Cuba, from an early age the Guillot settled with his family in Havana. He traveled the path traveled by most of the figures of the song of his time: in childhood, performances with family and friends; in adolescence, amateur programs on the radio followed by the subsequent professional debut, almost always through musical or vocal groups.

In his case it was with the Siboney quartet, directed by the mythical Isolina Carrillo and of which was also part of another great Cuban music, the pianist Facundo Rivero. This guaranteed a promising start to the inexperienced artist who had also studied singing at the Conservatorio de La Habana with the soprano Hortensia Cohalla -one of the most prestigious teachers of that specialty of the time- and the prestigious singer Mariano Meléndez. All these backgrounds serve to confirm that she was not an improvised singer at the time of her solo release.

After her first performances in Cuba, Olga Guillot made a brief foray into the Latin music scene in New York. Then he tried his luck in Mexico, one of the strongest places in which women bolero performers are concerned. There he sat chair; so much so that when he decided to renounce his island for political reasons, it is Mexico where he lived and made his career for longer.

Precisely from the Aztec country came an antecedent that could have influenced the Cuban: María Luisa Landín, who had achieved great applause in radio, theater and cabaret in her country. When this woman arrived in Havana in 1940, she began-supported by the records she had recorded-a stage of expansion of her popularity throughout the continent, which would lead her to fame and provoke a wave of followers in style and repertoire.

But this is not the only possible influence of Olga Guillot, there is also the work of a previous great Mexican bolero, Toña la Negra. The two opened the gap to female voices on the American continent towards a genre that seemed to be limited to man. Toña la Negra had a contralto voice with a timbre so peculiar that any approach to it could become imitation. Olga Guillot, who was not given to imitate, seems to be closer to María Luisa Landín, although with a style of her own. Of course, there is something that related her to Toña la Negra: in her voice the same mystery throbbed in the great interpreter of Agustín Lara.

After Mexico he appeared in Buenos Aires and became an idol. its Brownish skin, sung a duet with the author of the piece, Bobby Capó, was like a hymn in Argentina. After conquering all of Latin America, Europe surrendered at its feet since, in 1958, it was presented for the first time in Germany, Italy, France and Spain.

By then he had become empowered in the world of the album. He was able to achieve it because he imposed a way of interpreting the honeyed and sensual bolero that, supported by a direct repertoire, flat, although not aggressive, came to him as a glove to the glassy environment. With that style and that repertoire had come, in the second half of the 50 of the last century, a song that would be his musical fetish: Lie to Me, by Chamaco Domínguez. With Lie to Me she took over the vitrola and was the first Cuban singer to sign contracts to record discs specially designed for that powerful diffuser.

The myth that the female voices they do not sell in the vitrola it came down, although only she could dominate the bolero glass market with the voice of a woman in Cuba, at least for a while. Then, with his velvety voice and somewhat overactive style, he enjoyed sustained recognition for more than 60 years. Because the Guillot, from its beginnings, not only played boleros; in its repertoire we can find, besides, they are, chachachá and other foreign rhythms. One of his first great record hits, in fact, was the Spanish version of the American song Stormy Weather (in Spanish Gray rain), and in the 60 he recorded Communicating, a pop song by the Chilean Arturo Millán, with which he won a resounding triumph.

The solo reign of Olga Guillot in the cuban guitars ended when in the world of romantic songs appeared a singer of overwhelming success called Blanca Rosa Gil. When this began his career - really meteoric and unusual - a new diva of the song had already been empowered in the Latin American record market: the Carmen Delia Dipiní from Puerto Rico. The style of this singer was markedly overactive, although it must be recognized that it was a very useful spring when it came to conquering the preference of a large audience inclined to the melodramatic in music. 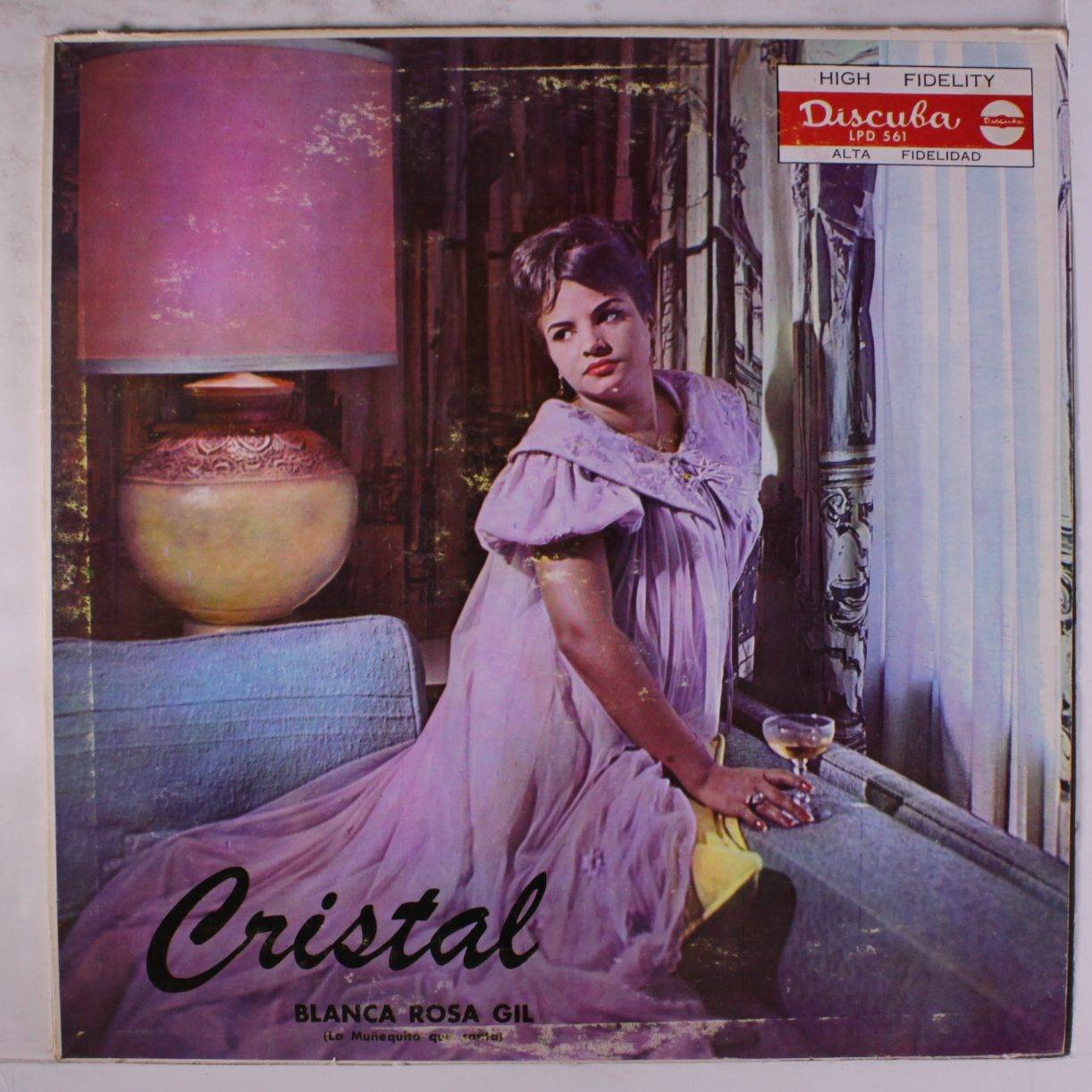 Cover of the album «Cristal», by Blanca Rosa Gil.

Obviously the Cuban greatly admired the Puerto Rican, and could not help but endorse some of the stylistic and repertoire resources that had placed the Dipiní on the tops of all the survey. But the new interpreter had a tone more acute than that of its predecessor and with it the affectation to which we have just referred was more evident. Assigned to a repertoire that assumed the corny as an essential component, with sweet and sticky songs, Blanca Rosa Gil fought a battle for the fame of which she was the winner. Let's take a note: Carmen Delia Dipiní achieves a resounding triumph with a version of the tango bolero rhythm Only shadows (music: Francisco Lomuto, lyrics: José María Contursi) which is titled Shades. A few years later, Blanca Rosa Gil makes that same version with the same title. The result of the Puerto Rican is a more bald song. The one of its follower leans much more in the four bars of the Cuban music and it is more bolereado

The career of Blanca Rosa Gil had a beginning sui generis. He had traveled from Havana to Caracas in the company of a family friend with many relationships in the world of entertainment. As he was still a minor he debuted in a television space dedicated to children. Gaspar Pumarejo, the Santander native who opened television in Cuba, visited Caracas, heard her singing and took her back to Havana, where he presented her as "the little doll that sings" in 1958 and quickly gained strong support from the public.

It is then that some of his subjects pass with great success to the vitrolas. Overnight he becomes the head of the cabaret Ali Bar. His presence on Cuban radio and TV is a constant. Their boleros occupy the first places in the most important Cuban "nightclubs". In 1959 he made a brief tour of Chile, Colombia and Venezuela. It is presented again in Cuba. His popularity is on the rise. In the 60 it leaves again to other countries, returns to Cuba where its interpretations of Shades and Fire kisses the great record hits of the year will be proclaimed. After brief journeys, at the end of '61 he went on tour to Mexico and decided never to return to Cuba for political reasons. When this happens, culminates its presence in the cuban glass world that, in addition, is falling in a tailspin.

Blanca Rosa Gil lived for five years in Mexico, nine in Miami and, finally, the rest of her life and career lives in Puerto Rico. In the 80s of the last century he converted to the Christian faith and stopped singing for a lapse of 18 years, after which he returns to make some appearances on television and concerts in Miami.

Olga Guillot and Blanca Rosa Gil were the only queens of the vitrola in Cuba. With their voices, their way of interpreting and their tropical cadences, they entertained the leisure of the people from below in bars and canteens of the Island. And also, why not, of many countries of the continent.

His recordings have remained in the sound archives of radio stations, television channels, private collections and public institutions.

But the vitrola is no longer there.

We no longer hear the magic of the falling coin, the fingers that mark the musical number we want to hear, the movement of the discs that stop in front of the static plate on which, surprisingly, the circular acetate carrier of our selection is activated and it is placed on the plate that still does not move. Finally comes the instant that can even trigger our adrenaline: the metal arm is operated almost mysteriously, moves robotically and rests on the disk that begins to spin. Turn to sound the musical number we want to hear. In that riddle lies its charm.

The vitrola is gone. And with his escape the ritual has been lost, shared by the biggest cities and the most isolated corners of a continent, where weeping males tear sentimental sorrows only in front of the vitrola, and where there are also females that have been able to cry out -From the victrola- Lie to me more, what makes me happy, or to describe the moment in which in the secluded solitude of our souls, your anxiety and my restlessness met.

And that, definitely, is a vacuum.