(The scene that follows is fiction. I give it to the screenwriter who dares to turn this life into a film. In my opinion, it deserves it…).

PUNISHED, HE IS PUNISHED AND DOESN'T LEAVE THE HOUSE EXCEPT TO GO TO SCHOOL! The skinny teenager, tearful, hiding behind the door of his room, listens to his father argue with those responsible for culture of the municipality who have come to convince him that, without the young man, who is the main figure, the one who best dances of all and sets the pace in the choreography, the comparsa has no chance of winning that year. He just tightly crosses his fingers and tries, with his already long neck and now more stretched out, not to miss a word that is exchanged in the room, until he hears the final verdict: "I'm going to let him go, but this is the last time he dances, don't count on him anymore”. He jumps for joy and throws himself on the bed until they come to tell him the news “officially”.

The quiet rural village of Aguacate is closer to Matanzas than to the country's capital. Of humble people and surprisingly green landscapes, the childhood of the Cuban chess genius Ramón Capablanca was spent there. Nearby is the Picadura Valley, to which Irakere dedicated a beautiful musical theme in the early 70s of the last century. Aguacate has been losing its former splendor since the sugar mill that gave life to the community was closed in 2001 and the municipal headquarters were moved to nearby Madruga. Today it is a kind of ghost town, like many in the interior of the country.

Luckily, to ward off forgetfulness, he has had a kind of consecrated amateur historian. A thin young man with a pronounced receding hairline and huge eyes from his mother's heritage who, despite being born in Maternity Line (on January 13, 1976 according to the papers), tells everyone who is willing to listen to him about the historical values and cultural heritage of the town where —raised by his paternal grandmother— spent his childhood and adolescence. Organizing children with an artistic vocation in La Tropa de Aguacate, bringing artists and intellectuals to get to know the town and perform for the inhabitants, or write for various media about the customs, traditions, joys and sorrows of the people of Avocado, have only been some of his passions.

Because, let's say it once and for all: Helson Hernández is passion and commitment personified.

The grandmother, a worker and natural leader in the Central Azucarero and in her social environment, painted as hobby and while doing the housework, he sang at the top of his lungs imitating Esther Borja. The boy's father, Helson, worked in matters of livestock genetics, but already in the 1960s he had joined, together with his countryman Huberto Llamas, in the movement of amateur artists, from which he finally emerged as a professional theater actor. His father frequently took him to Havana (70 km one way, 70 km return) to rehearsals and performances, and he has a clear memory of his father's debut in the co-star of Saint Camila of Old Havana. Camila was the then young Alina Rodríguez.

The natural landscapes that ran before his little face leaning out the bus window on each of those trips, and the dramatic settings in which he spent his nights as a forced audience, must have marked the boy's sensitivity very early. But what really seduced him, they say, was the music of the great ballets... It was enough that the first chords of any classical ballet program sounded on the television, for the little one to run to the room to park in front of the device, ecstatic.

In the town's House of Culture, where he arrived alone, by his own feet, he began to take his first steps as a dancer. Secretly, he went to rehearsals and productions. Until the family found out when his curiosity about the art of dance had already begun to pique him intensely. And despite what we might hope —seen the family history — (Oh, rural town, small and macho, oh, such a long gray five-year period…), he did not have any support from his own. Dance was probably not a masculine enough activity for a small-town, conventional and “integrated” family. Settled the period of the dance workshops in the House of Culture with the prize (of course!) to the group of Aguacate; In the scholarship where he had to do the pre-university, a local station was heard with which they were given the early stand-up and that accompanied, on big loudspeakers, the extracurricular moments. Without entrusting himself to anyone, the tall, enthusiastic skinny man began calling the station, asking for one song after another, until he lost his embarrassment and offered himself as a correspondent. The radio people couldn't be more delighted to have secured a diligent narrator of student activities at the local pre-university. It was free for them and he had a voice and diction that most professional announcers already wanted…

One day, it was necessary to cover one of them and they remembered the student with the good voice. And so Helson ended up on the radio, in what he imagined was as close to art as he would ever get.

When he finished high school, although he had dreamed of studying medicine, he came with his grandmother to live in Havana and the radio began to surround him and monopolize all his time. He entered the radio network as an announcer and ended up interviewing personalities, writing scripts for cultural magazines, from one radio station to another: Cadena Habana, Metropolitana, Rebelde, COCO, Taíno, Progreso, even CMBF, which is his "home" of the last years. There are hardly any hertzian waves left in the ether that surrounds us through which his attenuated vocal register, with perfect modulation and diction, has not traveled.

One day, it is his turn to interview Laura and Fernando Alonso for a program. You can't believe it. In the end, he is encouraged to ask for a photo together and tells them that being a dancer is one of his frustrated dreams. The teacher Fernando Alonso makes him bridge and he cannot avoid commenting to Laura: With that bridge, that size and that figure, it is not necessary to start dancing as a child. A few days later, at the age of 18, Helson enters the ProDanza Cultural Center, to attend all the professional workshops that appear, to "eat" ballet. The dedication of the teachers and a personal will that knows no limits —endless hours of self-preparation looking for solutions to postures, watching others dance— They were beginning to make him believe that one day he would really get to play a secondary character...

However, the cinematographic sequences of his life provided him with another plot twist: Prodanza is going to stage Don Quixote in co-production with the Camagüey Ballet for the Festival and the truth is… there is no one more similar, in body and soul, to the Knight of the Sad Figure. The maitre Iván Monreal Alonso is in charge of preparing Helson Hernández for the leading character. With 21 years and only three years of studying classical ballet, the tall boy from Aguacate dances at last, before the public, with the music that blew his mind as a child. 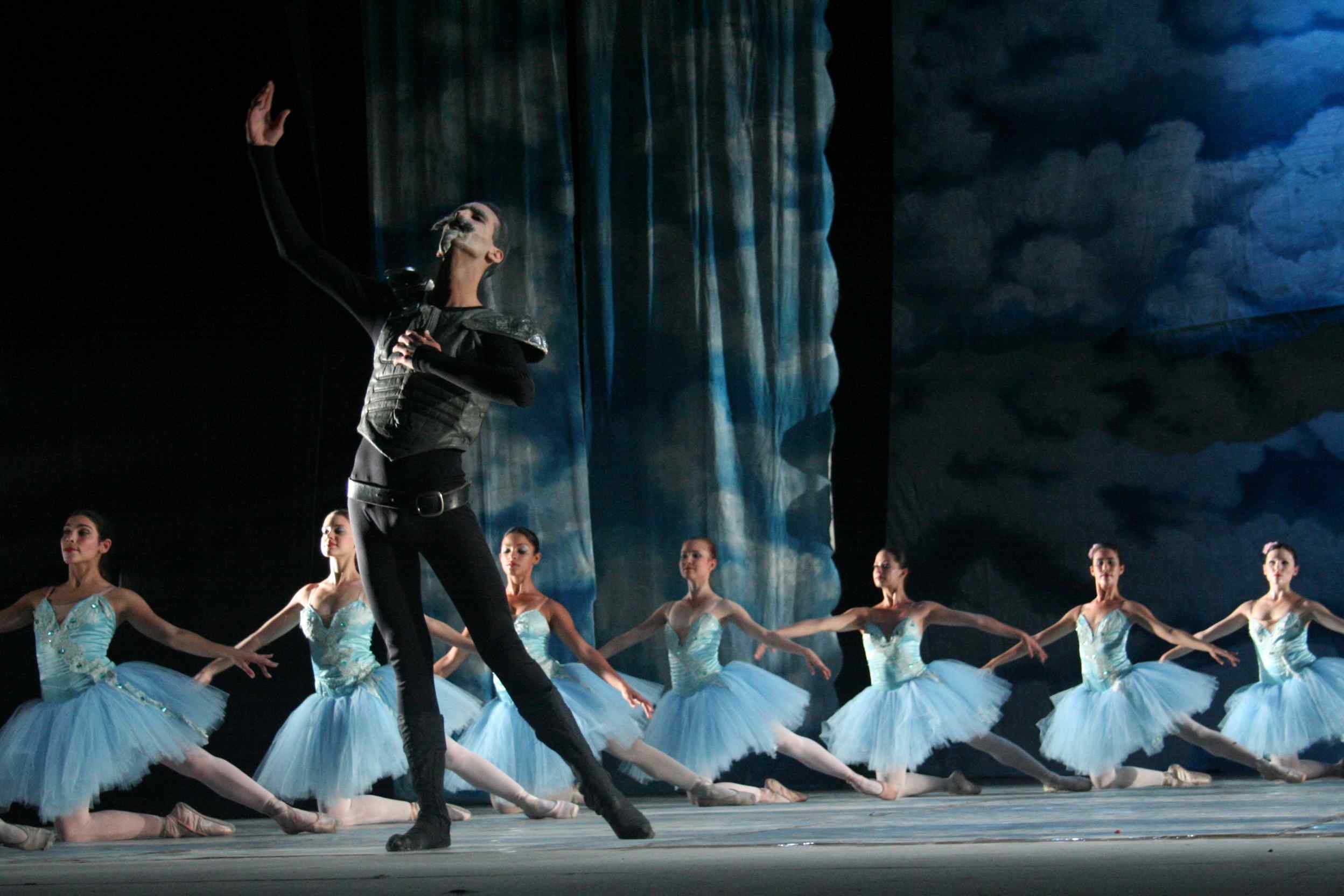 At this point, the reader should know that it is impossible for this narration to be sequential, because Helson has remained working on the radio while learning ballet techniques and becoming a “pepe” dancer. It seems that his days have more than 24 hours, that he has plenty of time while the concerns crowd him. He resumes his vocation for medicine and often sneaks into the hospitals where his doctor friends practice, to witness medical procedures and complex surgical operations. AIDS is raging and he wants to be useful to the HIV-positive community. Convinced that art works miracles, he goes to the National Center for the Prevention of Sexually Transmitted Infections and HIV/AIDS, to try to convince them of the usefulness of involving artists in prevention campaigns, which will thus have greater reach. . Days go by and no one pays attention to him in the midst of the infernal vortex of work at the Center. If he doesn't have AIDS and isn't a doctor, what does that boy do here every day, waiting for what? Finally, an official is moved and pays attention to his idea. And so the galas are born To live, sponsored by the Center and in which Helson is now making his debut as artistic director, producer, set designer, repertorist and librettist. Every year the galas become more and more popular and, with them, he learns in practice the ins and outs of cultural management, at least as far as live shows are concerned. Every relevant artist who passes through his radio studios is invited to To live and vice versa. While… he rehearses, studies, dances; not only does all the Don Quixote de Prodanza of the time, but other characters such as the Pachá de the corsair, the Capulet of Romeo and Juliet. His career as a dancer faces a herniated disc, which forces him to undergo surgery and temporarily withdraw from the scene.

But there is no turning back in his journey through the stages. Without a specific methodology or theoretical studies of production or cultural animation, letting himself be carried away only by his instinct and his passion —which has caused many disappointments and some criticism— Helson always goes pa 'above the mess, as it is said now. With the support of maestro Roberto Chorens, then Director of the National Lyric Theater, who trusts him, his organizational talent, his commitment and work discipline, he takes charge of directing and producing the shows Maria from Buenos Aires by Astor Piazzola The prodigal son by Arthur Sullivan, Romeo and Juliet of Gounod, Rusalka, West Side Story and candid by Leonard Bernstein.

Not happy with the specific public of the galas To live and lyrical shows, it is committed to mixing genres, nationalities, composers and audiences, and organizes various concert cycles: “Schubertiada”, “Fados de Portugal” and “Bel Canto”—this last one a format where soloists of the lyrical theater interpret each year works of an outstanding representative of the new Cuban Trova as Silvio Rodriguez, Pablo Milanes, Amaury Perez, Santiago Feliu—, just to mention the recurring events, among the dozens he has directed.

Are we already exhausted from so much hustle and bustle? Or is there room to imagine him teaching Voice and Diction at the National Theater School (ENA) for eight long years, or as an assistant and producer for soprano Bárbara Llanes and violist Anolan González?

Just a couple of months ago our protagonist was the person in charge of the world premiere of the zarzuela Saint Camila of Old Havana, in what has been seen as the possible rebirth of the genre in the Cuban 21st century. During the montage, will he have evoked his own childish wonder at the miracle of art? Will the scenes with which his father debuted almost 40 years ago resonate in his memory?

There are people who seem to be born predestined. With a vocation so powerful that neither prejudices nor prohibitions nor obstacles can prevent them from making their way, even bare-chested, without shield. This is just a fragmented and incomplete story; Vital cuts from the first 46 laps around the sun of an existence full of adventures, will, dedication and self-improvement. That of an inspired and inspiring madman, a restless town boy, with a tuneful voice and huge eyes from his mother's heritage.