I keep dreaming of trees

He had never entered the Sports City Coliseum, despite living a few kilometers away. I didn't know about the plastic and fuchsia flowers that pretend to embellish the second floor, nor about the posters or portraits of athletes in wooden frames, nor about the fabrics that hang from the ceiling; there since time immemorial. How much churre will they accumulate? I think, as soon as I enter. Even with its decoration and lack of swing, the dome of the Sports City is an imposing space. The circular building, with a diameter of 103 meters and a capacity for 25,000 people, carries with it the weight of our sporting history, which is historically glorious. This, at full throttle, must be a spectacle—also glorious—I think again.

However, it is after nine at night in Havana and Haydée Milanés sings for no more than two hundred people. Two hundred, from 25 thousand. Two hundred, of the more than five thousand who, perhaps, attended the Havana World Music of 2019 in the Salón Rosado de La Tropical. From the ramps that surround the stands I look towards the stage, arranged to the left of the basketball court and with a large screen behind it that projects the graphics of this edition. That and Haydée are the only thing in the entire facility that connects me to what is probably the best music festival in Cuba.

—There is Cristal beer, dispensed, at 50 pesos, shall we?

I abandon Haydée, I go in search of the improbable. 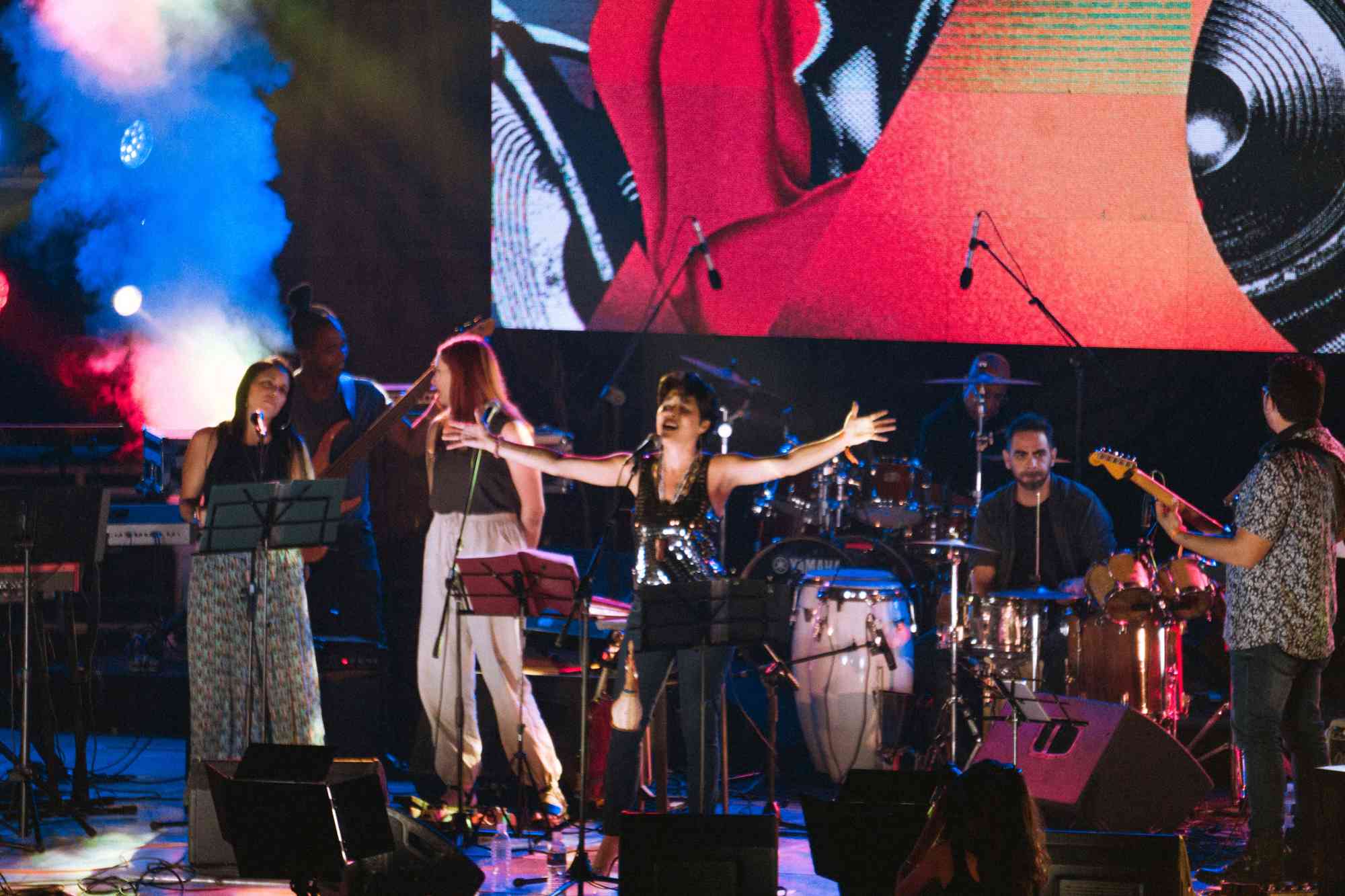 The return of Havana World Music, after three years of absence due to the pandemic, was supposed to be different. The festival returned to its first home, Club 500, once the José Antonio Echeverría Social Circle, in El Vedado, just a few blocks from the Malecón. But this is May, in the middle of the Caribbean, and it's raining. It rains every day, for a couple of hours, sometimes without much intensity, but it rains. The Echeverría, as expected, turns into a swamp, and the stage—placed there long before the rains began, when one could still dream—begins to sink into the mud. There is no infrastructure for sound, electrical wiring cannot be pulled, drainage systems do not work. Are there drainage systems?

—Don't say anything yet, but the HWM is delayed. They are looking to change their location- Rafa tells me in a WhatsApp message that threatened to further postpone my collective enjoyment.

Bim Bum Balaton is an Italian DJset that mixes traditional Balkan music with cumbia, world music, reggae. It's supposed to sound like this: to those mixtures. I do not remember. In the open air, with freedom of movement around the stage, near the machines, perhaps it would have discharged him. Beer in hand, with hundreds of people close to me sharing the same sweat, the same May humidity, shaking with the same flow.

Perhaps, too, it would have unloaded on Red Cloud. Despite the imposture. Perhaps at the Echeverría I would have believed his film and even enjoyed it. But for now Anthuán Perugorría, Lázaro Peña and their band continue to be a group of young musicians with tremendous talent as instrumentalists, who are unable to channel all their strength. 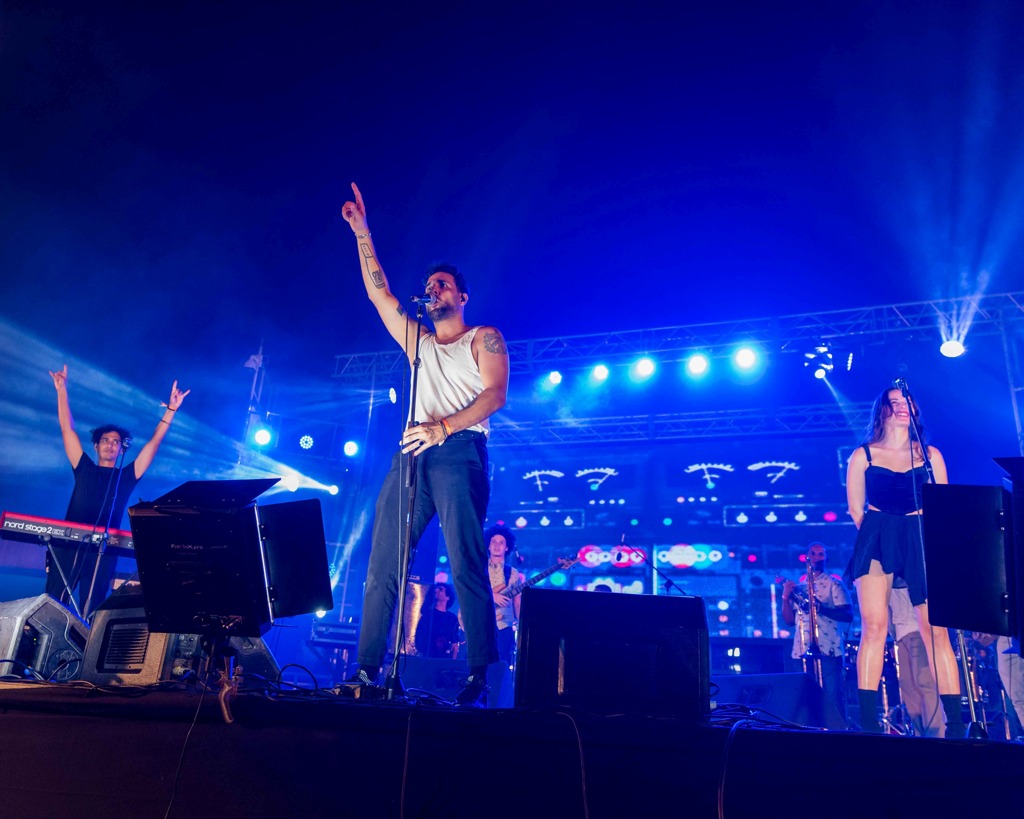 The acoustics of the place don't help either. I am sure that the technology in the Colosseum was of quality. Hardly Four Wives, the group of producers behind the event, would have allowed it to be otherwise. However, the band sounds bad. Too much stridency in such a closed place.

But X Alfonso is coming. Another concert also postponed due to the pandemic. Another return that was not and that could now make the destiny of the first day of this HWM change. The oldest of the Alfonso Valdés comes out dressed in black —as always—, accompanied by Pepe Gavilondo on keyboards, Ernesto Blanco on guitar, DJ Jigüe on machines, Anthuán Perugorría on drums, Yaimí on congas, La Reyna and La Real in the choirs. They enjoy the concert. I notice that X's creative fury overflows the stage, but fails to reach us.

"You can't think like a prisoner," X shouts, always so lucid.

How would this have been in the Echeverría?, the question returns. I'm already tired.

It's about 1:30 in the morning and Wesli still has to go on stage to complete the first day's program. Not in vain did the organizers arrange for the Haitian, who lives in Canada, to close. For the party. Through the Caribbean sounding in those musics. Nevertheless, I decide to go. I can't afford not to connect with him.

Marcos shares in his Instagram story a video of Scarlet Island at the Cuban Art Factory. Judging by these images, the real party was in Nave 4 on Saturday, May 28.

The project led by Javier Sampedro and Samuel Delgado won the First Base contest of the Havana World Music, obtaining the popularity award in 2021. Before the rain, even before the mud, Isla Escarlata —like other emerging Cuban artists: Misifuz, Raulito Prieto, Los Monos Lácteos, Kill The Party and Manuel Bas— would share the stage with Haydée Milanés, X Alfonso, Wesli, Mateo, Real Project, Rommel, Carlos Varela, and the rest of the artists invited to this edition.

The Scarlet Isles couldn't fit their hearts into their chests. They could, at last, test their pandemic-trained mileage. with all those shows close. They, the youngest, among all those.

But the festival organizers had to decide. And do it fast. On Thursday, May 26, 9:54 am, and without a new venue confirmed, Eme Alfonso understood that he had to ensure space for the youngest. And she looked for the only possible place for her until that moment: the Factory.

"They had an audience!" I reply to Marcos. I am immediately surprised by my surprise. Before seeing your video, I doubted that someone would reach Nave 4, with the Colosseum walking.

—Bafff, the Factory was full. But full, full. And these people heated that up. How was the Sports City? I want to see if I go tomorrow —he writes me back.

“Maybe I won't go”, I start typing on the cell phone. I delete the message. How can you not go? I think. Play Hector Tellez Jr. The last time Héctor Téllez Jr. gave a concert in Cuba was in one of those events organized by BandEra Studio, in La Tropical. So, I thought: “finally the rock star what did we need". He had it all: the pose, the swing, the riffs guitar, vocal power, charisma. He reminded me of Jimi Hendrix, bridging the gap.

It must have been before 2019. Because for that year —a little more, a little less— Héctor decided to settle in the United States. And, far from what I imagined, his new place in the world also became his sound laboratory. In Nashville, where country and rock are religions, Héctor joined other colleagues from many routes such as the Sweet Lizzy Project, and drank more of all those influences that he had brought since he was a teenager, when he listened to Nirvana, in his eagerness to find out why why they sounded so heavy, and he failed trying to get some of his riffs.

Precisely that desire took him to Seattle, the cradle of grunge, to record his album in the iconic Avast Studio with Krist Novoselic (co-founder of Nirvana) on bass and Peter Buck (REM) on guitars and mandolin, just to name a few. the best-known musicians who will accompany him in that production.

So on Sunday, May 29, I came to the Ciudad Deportiva Coliseum to listen to Héctor, the rock star —Cuban— who was beginning to approach those myths. 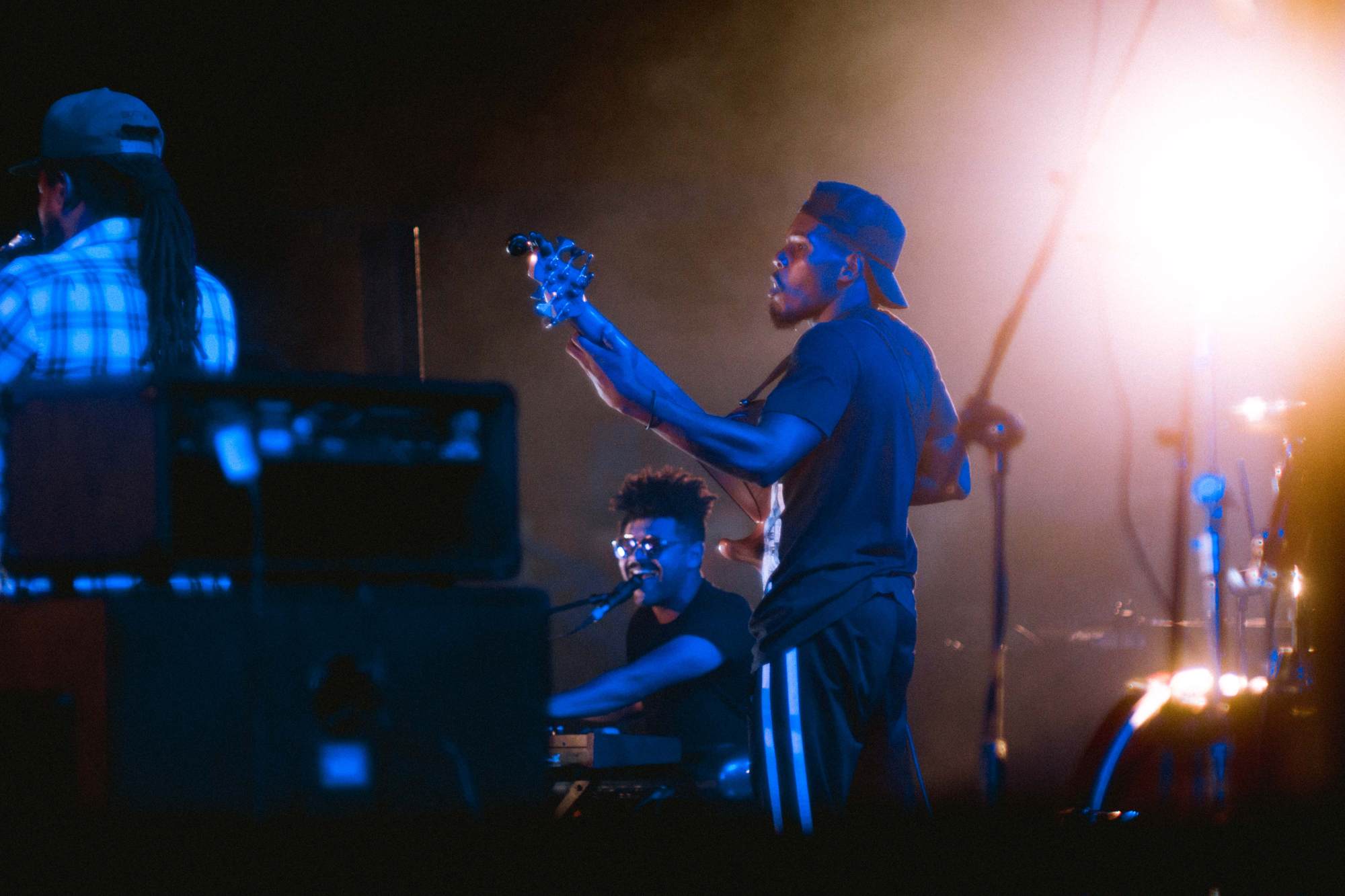 Before, Rommel, from Brazil, had passed through the stage; Real Project, from Cuba; and Mateo, a Colombian living in Montreal, whose songs were reminiscent of those of another composer and singer—this time Dominican but with influences from the Colombian Caribbean—that I would like to see sometime in Havana World Music: Vicente García.

Earlier, I'd gone out for more beers and bumped into Dayron. I had hugged him. We had managed to stay silent. looking at us That, to make matters worse, was also the first Havana World Music without Ernesto.

"He would have been here," we managed to say.

Héctor drew the first chords from his guitar and threatened to start. I hugged Dayron and ran to guarantee myself a good spot.

The son of a Cuban bolero icon wore a traditional Chinese-style short-sleeved shirt, jeans, boots, and glasses. all black It was him front man of a very guitar-oriented band, with Luis Dumont guarding from the drums. Few in the Colosseum were aware of what would come next. Because with that hunger to play, to release everything he had learned in the magical lands of rock, there was no force capable of containing him. We didn't want either.

So Hector conquered us all. He did the impossible until then: erase the physical distance between artists and audience. More when it rang Killing In The Name, first single from Rage Against The Machine, metal anthem against police violence.

Some of those that work forces

Are the same that burn crosses

—What is Carlos Varela left to do, now, after this? — asks someone who already sang Carlos in the 90s, at the beginning of the 2000s, who hasn't seen him for a little over 10 years.

Although he had flirted with the Cuban public in recent times—as a guest at a concert at the Gran Teatro de La Habana, in private concerts in the city—he of the Generation of Moles did not present himself with a massive show, on the island in the last decade. His concert at Havana World Music was, then, the most anticipated. The one that no one wanted to miss. For historical.

Nostalgia ate us all. Even Carlos. That's why he did the show we wanted. Como los peces, Seven, Family photo, Background curtain, William Tell's sons, walls and doors, old songs that he composed in a past Cuba that increasingly resembles this present-future one, were played at the Coliseum. Meanwhile, Carlos spoke, questioned his audience with that accent that was inexplicable until now. No surprises, until then. 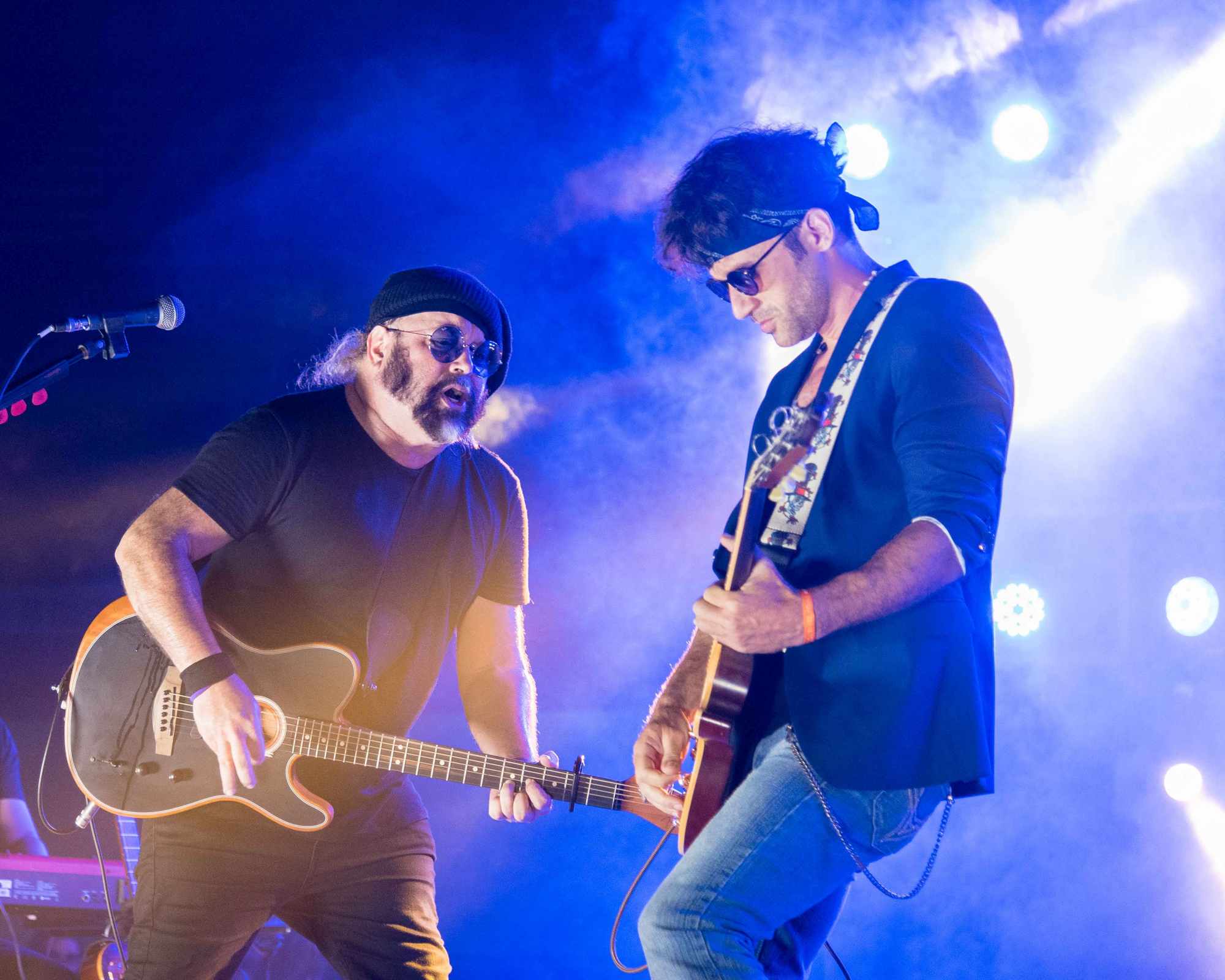 Until that public, whose average age did not exceed 25 years, shouted "Freedom". Twice. With the lights of their mobiles as a banner.

Minutes before Carlos appeared on stage, that same audience had invaded the stands. It had become compact. They were young when Carlos released his compilation album William Tell's sons (Graffiti Music Records, 2005) were, if anything, seven years old. Young people who when Carlos published Como los peces (Ariola/BMG, 1994) and Jalisco Park (Centro de la Cultura Popular Canaria, 1989) had not yet been born.

So when I looked around and saw that audience, I wondered if those “kids” really knew any Varela songs. I was wrong. They sang them with more euphoria than me, with more desire than me. Each and every one of those —“old”, so “nineties”— songs. If that's not transcendence, I don't know what is.

—I… I keep dreaming of trees— shouted the singer-songwriter, as a prelude to what would be his penultimate song at Havana World Music: The woodcutter without a forest.

I wrote down the phrase. I wanted to send a message on WhatsApp. I erased it. That was the most beautiful thing he could say tonight. I preferred to keep it.