The pulse of Los Espíritus in Cuba

Nave 4 of the Cuban Art Factory (FAC) is an incredible space in Havana where live concerts of all kinds of music take place every day. Last Thursday, November 8, in one of those lucky moments, the Argentine rock band Los Espíritus took the stage for the first time in Cuba. Emerged in 2010, the group interrupted its current tour of Mexico and diverted to the East, attracted by the rhythms and sounds of our music.

We asked ourselves what would be the expectations and reception of the diverse public ─cubanos, foreigners, musicians, artists, music lovers, more and less young─ that come to FAC. To our great surprise, with the place overrun, a contagious rhythm shook everyone, some sang, others danced or let themselves be led to the stories and experiences of the different songs.

The group performed music from their three record productions The spirits (2013), Gratitude (2015) and Burning water (2017). Songs like Hurricanes, Jesus rhymes with a cross and The wheel that turns the world they unveiled the mixes, between rock, blues, folk and western, that distinguish this band. It was surprising to perceive the strong connection that united the members of the group, as if they all shared a single instrument. The fidelity of the live sound, devoid of sequences, allowed to enjoy each guitar solo, the rich timbre of the three percussion sets and even the work of the choirs and the main voices.

His albums were attractive, but seeing them showed us that this group makes music with what we call "bomba", with a high degree of complicity and faith in what they have created.

Why the name The Spirits?

Maxi Prietto: When we met to put together the band we were in a musical search. We were very clear that our desire was to mix a part of the blues, distorted electric guitars and percussion to recreate sounds of the city and some more jungle things. That was like the genesis of everything, we were friends beforehand and we started playing. When we had to get a name we thought of Los Espíritus and it seemed to us that we were left with the concept of imagery that we were working on at that moment. Currently it makes more sense for us that the group is called like that.

How have they achieved this mixture between the different genres, the sounds of the city and the jungle?

Santiago Moraes: I think it's a very comprehensive idea that mixes music with our aesthetic as a group. Living in the city surrounded by noise and chaos inevitably gives you the desire to dream places like the beaches here in Havana, that is reflected in our lyrics. The sound of the group shows a little what we live and what we seek, balance between reality and imagination.

We mix what each one listens without copying it, we simply grab it, assimilate it and then it is a group of friends interacting and exchanging letters. The music and the imprint of the group arise in the rehearsals and playing a lot together. There are not too many premises when doing that, each one is looking for his place. There is not a person who orders and says a certain thing or style, each one adds to touch with what he has.

The letters are written by Maxi or me, it is something perhaps more solitary that we then take to the group. When I create a new song what I do is touch it and the rest when listening to it they begin to join; we find it with repetition in trials and functions.

In previous statements they always comment that the musical production process is a very valuable moment for Los Espíritus. Why?

SM: What happens to us is that the songs are very mutant, they can change all the time. And when we record them they take a fixed form, they stay frozen, we can hear them and see them from the outside. They finish defining themselves in the study and this helps us a lot because that process of constant mutation stops.

When we started recording we did not have enough money to pay for a studio; we also had only three songs as much and we did them with our media where we rehearsed. We, Miguel, Maxi or myself, were the sound technicians. That led to many songs ending in post-production, editing and mixing. On we recorded voices, choirs, guitars, we cut and so they emerged The spirits and Gratitude.

With Burning water We already had the resources for a studio and decided that this album should reflect the group playing live, with a sound and arrangements that we could play on stage with our hands. We recorded them live together and it was different from the one we had been doing.

What can you tell me about the diversity of social, political or religious themes in your songs? Do you attempt a critical reflex in these?

SM: I think the premise is the freedom to write and sing about what we want. Not always what is wanted is said, but what comes out. But no, we do not intend, only sometimes. They are the experiences we have that lead us to write. 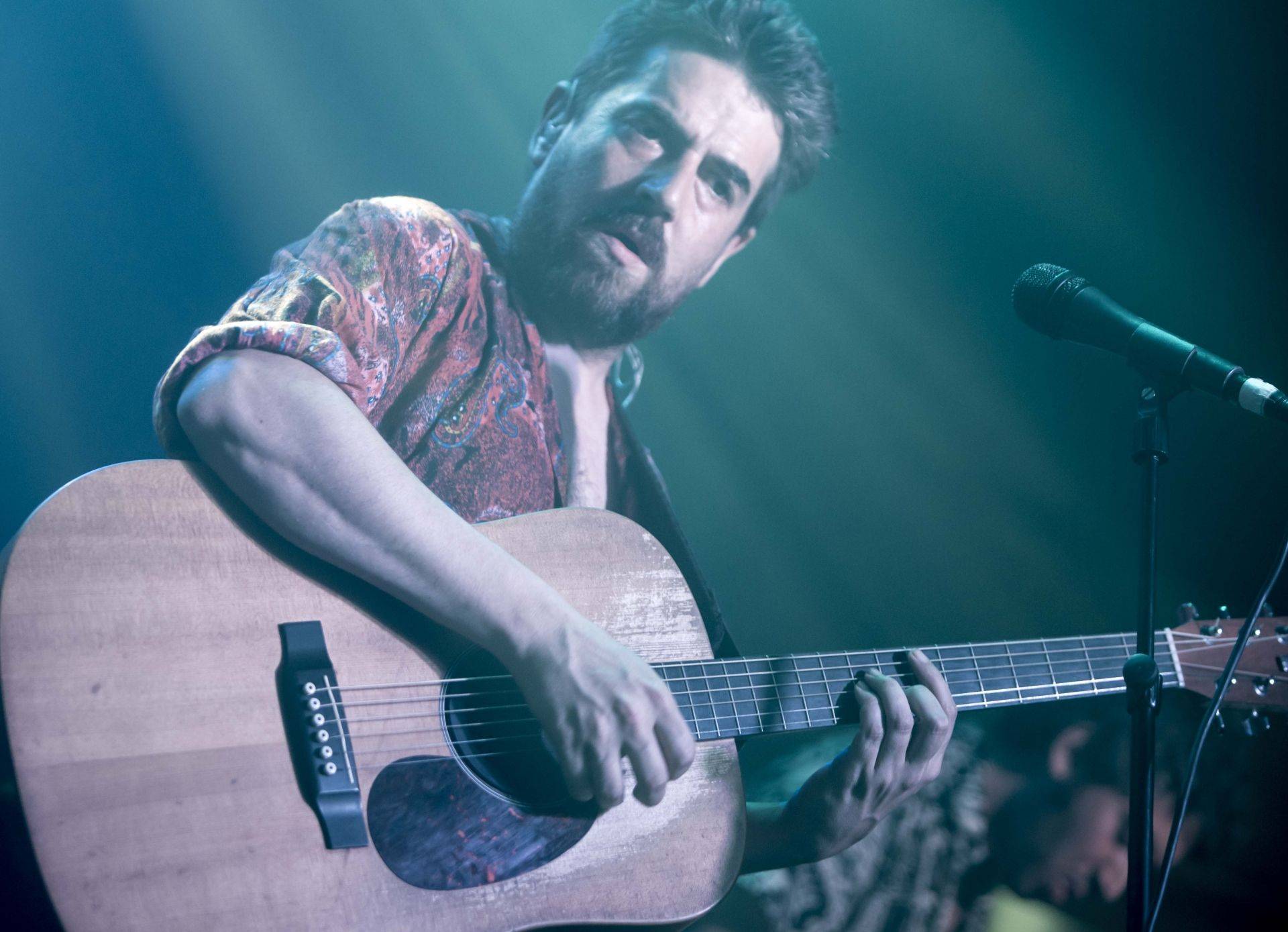 Santiago Moraes, member of Los Espíritus, in the concert performed by the band on November 8 at the Cuban Art Factory. Photo: Ana Lorena Gamboa.

The iconography that has accompanied The Spirits since its inception is rich in very elaborate images, colorful, symbolic, with some attributes and characters that dialogue with the culture of the countries they visit. What can you tell me about this job?

The images that accompany us on the tours are made by a graphic designer called Carla Flores, the old Flores. She made the covers of our first two albums and that of Burning water it was made by Santi Pozzi. We work with them two, mostly with Carla. In addition, they design our flyers, covers, posters, etc. I feel that they complete the aesthetic proposal of the group very much.

When we asked Carla to make the cover Gratitude We began to ask for this and that, immediately she stopped us and said: "Give me the songs, I will listen to them and I will show you how it will be". What music transmits to her, she tries to capture it and I think that in that way it works very well. It is music and image, there is no word in between and makes the concept very strong.

How are The Spirits inserted in the current context of popular music, independent in Argentina?

SM: There are many independent groups, in fact, what is growing the most in recent times, is the new thing that is emerging and the places are filled to see them. What the great labels disseminate is what they have always sold for decades. I guess it has to do with the changes generated since 2000.

MP: And with the internet more than anything. Before the diffusion was in the other media and to appear in these you proposed contracts. But since people have Internet and want to know what is happening, they get into portals and pages where they find everything. Many niches are assembled and the ball begins to run that such a group is good, they start to see you and that's how it worked for Los Espíritus, people went to look for us. The change of paradigm was fulfilled to achieve what we do, maybe for more commercial music it does not work in the same way.

Are they still completely independent or do they work with a musical label?

Miguel Mactas: No, we work things ourselves.

SM: We self-produce and work with our people. Who produces this tour is Nacho Perotti, is a member of Los Espíritus that does not make music but that generates the conditions for us to play. And so we achieved all the recitals and records. We are a group of seven musicians, but we count eight because he is part too.

Why have you decided to record in Havana?

The reason why we are on this side of the world is our current tour in Mexico and we take advantage to come to Cuba. For us it has a lot of magic to be in Havana because we love their traditional music.

We have been recording what will be our next record during the tour and we have been studying in Buenos Aires, Spain and Berlin. Instead of stopping the recitals live to record a record, we continue wherever the path takes us. And when this trip to Cuba came out, the first thing we came up with was to be able to record here as well. We will do the last songs because we have almost finished the album and then the mix and the master will be before the end of the year.

In addition to the recordings have other information or ideas about the new album that will launch next year?

We usually record the discs in four days. We still do not have a name and it will not appear until we hear it fourteen times recorded, but all the songs are original. What can change on the disc is the sound, before we recorded and always gave us the feeling that more percussion was still missing. Now we have a new member, percussionist, who is Francisco Paz, he joined about a year ago. Since then the group achieves a greater density with rhythmic resources and new sounds.

Carla Mesa Musicologist and for more. Shy but with character. Music, smile, art, dance, family and friends. I don't lose faith in being a better cook. More posts