It has been almost half an hour since Gillen Garcia had to serve a milkshake to one of the tables. It is not that the roles in La Casa de la Bombilla Verde are very limited that we say, but usually at this time Gillen Garcia is in the kitchen, jealously watching his potato tortillas and curry chickens. Today the bar is full and in the center, forming an uneven circle of instruments, the Interactive Ensemble of Havana improvises on a melody created minutes before by its musicians. Today the bartender serves as a waiter and Gillen is divided between the stove, the bar and manage his bar. From the portal, while sucking on his red Hollywood, Gillen listens.

In the center, a girl —Charlotte, is called and comes from New York— vocalizes lying on the floor. Two others have sought their place to incorporate violin and flute into the discharge. The song has been playing for more than twenty minutes and Gillen is a little worried about that milkshake. At some point he thought of joining the sound of the blender, but finally it was not decided. The red Hollywood burns almost on the fingers of Gillen who sucks one last time before throwing it and enters a side aisle that ends in the kitchen.

At first, in the small garden, the name of the place welcomed in very white letters. Not now. Now you receive a very dim focus that sometimes does not even radiate enough light. Now who comes to La Casa de la Bombilla Verde does it by heart, because he knows his nights or has been recommended by someone nearby. Although it is just one block above Line Street, there must be few "I just passed by and I went to see what this place is." And it is not that the music that emanates from the small bar - almost always on Thursday through Sunday evenings - does not have the ability to attract the curious, but in this part of Vedado the 11th street is little traveled and the author's song does not He has as many followers as he used to. The usual programming of the space is made up of artists who defend their songs at the stroke of a guitar, little else. Although occasionally downloads of jazz or contemporary music are made. This occurs, at most, three or four times a week. The rest of the days La Casa de la Bombilla Verde is a quiet place to have a beer or fall in love with a playlist background.

I want to believe that today it will be more or less like that. That I will not have to listen to the concert from the portal and that arriving at the bar to order a beer will not be practically impossible. But I am wrong. Although it is Tuesday and this presentation was orchestrated just a few hours ago, it is Yusa, who has not been in Cuba for a long time - I have not seen her for almost ten years, so many things have happened since then - and, by the time My cervical let me arrive, everything will be reserved. Sometimes it happens like this: a concert or a download with no time to post on social networks is put together. Word of mouth does its thing, and suddenly Gillen Garcia and Patricia Ballote have to worry about serving more public than their license allows them, or they must deal with neighbors and the police for noise at the wrong time.

The small “stage” has been arranged on the other side of the bar, where the tables that I have always reserved used to be. The guitar and the three of Yusa rest under small spotlights whose mission is to really illuminate the works that hang from the wall. On one side, the marímbula of Oscar Sánchez and, on the other, a drawer on which Robertico Carcassés and Oliver Valdés will sit, when the time comes.

Yusa hasn't arrived, but everyone else is here. Some friends offer me a chair right in front of the microphone and I think about the issues that I would like to hear tonight, on the topics that will surely make me cry, on which I will ask when the time comes to assemble the set list between all.

(When we think that this concert can not surprise us anymore - because Kelvis Ochoa has already sung a duet with Yusa and both of us have broken our hearts - Julito Padrón and Alejandro Delgado will blow their trumpets from the portal.)

The space is very young. This summer he turned only three years old, but here he has paraded a good part of the author song that sounds right now in Cuba. Even the one that sounds only occasionally, because its authors have been out for many years and, when they decide to return a little, they make land in La Bombilla. Few nights like that in which, fifteen years later, Levis Aliaga sang her Ana again in Cuba, above an unequal and nostalgic choir that, after a while, kept singing softly convincing the sea ... Others travel by road and are just as Expected: Roly Berrio, Leonardo Garcia, Ariel Barreiros. The trova has made La Bombilla, what luck, her home.

They have not come to discover the author's song to this city, although perhaps many people do. How many trova clubs exist in Havana, I would not know how to say, but many. The merit of La Bombilla, if we were cautious enough to mention only one, is to have created an intimate and selective space that is not limited to one genre, but opens its microphones to projects as innovative in Cuban contemporary music as the Ensemble Interactive Havana (besides string trios, spoken word, musical performances ...), and where the programming is directly proportional to the taste of its managers. Good taste, it is worth pointing. And then I could mention the opening of their microphones to very young guitars in which Gillen and Patricia deposit some faith. Sometimes a lot. But it is also part of the deal that is made with music. 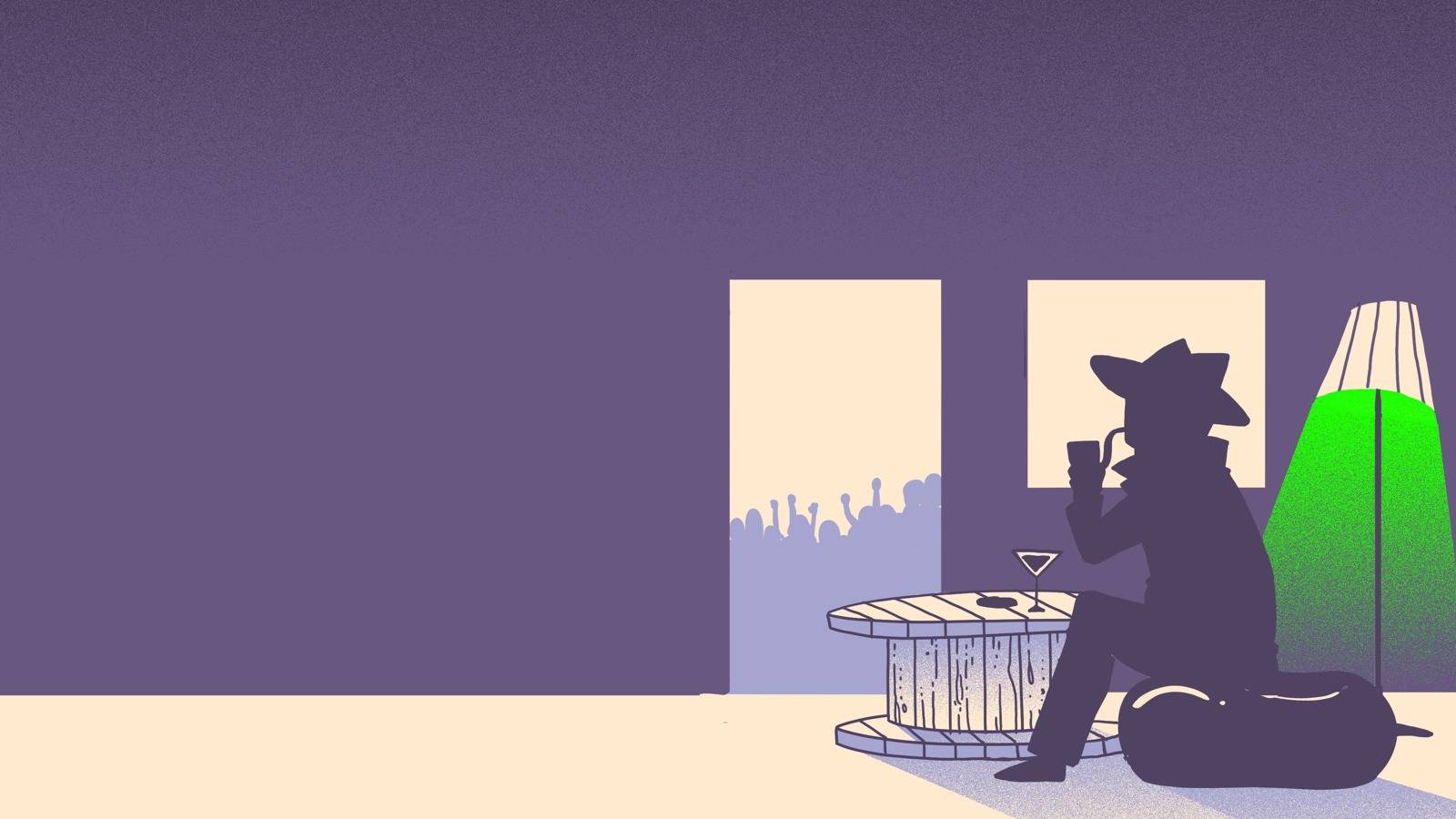 The House of the Green Bulb. Illustration: Mayo Bous.

I have moved from my chair to the bar, looking for a better posture for my cervical. Fleeing the songs that Yusa drops in the few empty spaces in front of her. Gillen has not been allowed to sit on the floor for months, but tonight he has been able to do little about it. I don't know if, at this point, the neighbors are still worried. I do not know if he is aware that this has been one of the best nights we have lived in his House. Lying on the pallet that adorns the side of the bar I let you know: this is the best concert you have scheduled, and we laughed at the beautiful, because we both know that it may not be long before one of the two approaches the other With the same phrase on the lips.

And in the meantime time passes / just like yesterday./ I am witness to my memories / and in the end the attempt will remain / and the dew will make a place / again in my garden. / If I got lost and you appear / cloud you hide My moon so many times / tell me where you are going now / Stay longing / tomorrow.

Name: The Green Bulb House.
Address: Calle 11 between 6 and 8, Vedado.
Hours: Tuesday to Sunday, 5:00 pm to 1:00 am
Ticket price: Free.
Beer price: 2.25 CUC.
Capacity: 50 people
Ways of using music and genres: Recorded and live music. Trova, fusion, jazz, others.
Property model: Private.
Diana Ferreiro Journalist and editor almost all the time. Addicted to ink and the color red. He writes less than he wants to and listens to more sad music than he should. "Coffee, beer and perreo" as a mantra. More posts