How to stay Aterciopelados and not grow old in the attempt

There is a video on the YouTube of Aterciopelados.They are in Havana, November 25, 2016. In the middle of a song they whisper to Héctor Buitrago that Fidel Castro died. In the public that burst El Sauce there are diverse reactions. First, few believe it. Several want to follow the debut in Cuba of one of the most important bands in the history of rock and roll in Spanish. Andrea Echeverri, after a moment of perplexity is placed next to the stage. Nothing to do. Silence.

This 2019 concert in Havana - November again, Wednesday thirteen, little change in the environment for three years here - is nothing more than the closing of that interrupted at 30 minutes of the first night with the Nightingale and ConEctor. Andrea Echeverri confirms it shortly before starting, at the Pavilion Cuba, our second chance with them: “In 2016 everything was canceled. It was super weird, super sad and then here we are. Today we will conclude. ”

The Colombians returned thanks to the bridge established by the Patria Grande Festival between the Cuban scene and Latin American contemporary music, focused on the field of rock. Los Rabanes (Panama) and Tijuana No! (Mexico), were other good international tour groups invited to this edition.

Toques del Río opened the afternoon of the return. The Cubans began to unload their mambo, Funky, rumba, rock and roll and reggae filling (to say something that appears) before an audience that is captive and follows it through clubs and social networks.

After a little more than an hour warming the atmosphere they gave the stage to the Aterciopelados, who arrived in a reduced version and turned to several musicians from Toques del Río. The concert from now on will be an amalgamation of classics of the Bogota band and themes of the Claroscura album (Sony Music, 2018), the first of unpublished in ten years and that won them a Latin Grammy and the Grammy nomination.

Attendance is above the ordinary at the Festival, but it seems small for a band that in 2018 brought together, to tell a fact, 80 thousand people during a show with symphony orchestra in the capital of their country. Are Cuban audiences not as open to knowing other sounds as they think? Does the economic crisis kill the desire to move from home? Was the promotion of foreign guests, almost unknown to the mayority, poorly radiated and never seen on national television insufficient? A little all that there was.

Anyway, those who are aware or fell here by chance quickly connect with the mutant aesthetics of Andrea and Hector, accustomed to doing their work - rock workers, she will say - the same in crowded stadiums than in small clubs.

They open with Play, the track the initial track of their latest album, a song shared with the Chilean Ana Tijoux and that introduces the electronic sounds that run through the entire new album.

“It's for stressed adults, because it turns out that making music suddenly became a competition, a business, a race to excel and survive. Here we talk about reconnecting with joy, ”explains Andrea, who is as happy as Colombian, Mexican and Venezuelan fans - medical students - who early marked territory in front of stage and shout no more begins. 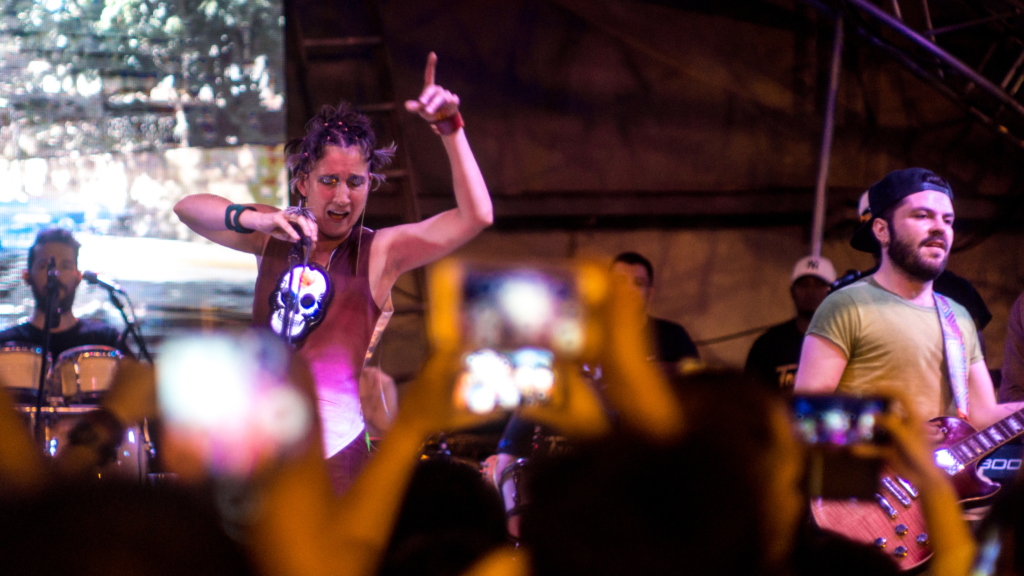 Aterciopelados is one of those groups that naturally assume Latin American popular culture, and fuses it with the most unimaginable styles. They do it with that song by Juan Gabriel, He venido a pedirte perdón,turned by them into a record hit; or they incorporate into their performance all the kitsch aesthetics of plastic flowers and amazing colors.

Andrea, who at this point still wears the purple robe full of peace symbols that will be removed later, shows up very well live and bombs the next theme, Cuerpo, which at the rhythm of an electronic cumbia makes her feminist stance clear. And dance From time to time he shouts with a punk spirit or demands from the public: "Let's see, rebellion!"

From La pipa de la paz (1996) interpret Baracunatana and Cosita seria, two of the themes that profiled the band as Latin rock classics, and their leading voice as an antimachist icon. In Cosita seria Cosita seria she says, for example: “A guy yelled at me / If it was ice cream I sucked it / Another said I am a dog / Pos your bones I go and bury / The very beast does not respect / I turned around and gave him the jeta ... "

Almost 30 years on the stage should leave wear and not everyone can boast of the creative vitality and reinventing ability exhibited by this pair. Since 1993 they planted a flag in the advanced of rock in the continent and were pioneers in their mix with the folk and traditional music of Colombia.

They themselves humorously summarize their history of contradictions and ups and downs inx Dúo, one of the main themes in Claroscura Claroscura album and where they achieve a very modern, electronic sound, without cutting the root of the punk cachaco that fed them in their beginnings, but that is, Anyway, a ticket to the future rather than a nostalgic passage.

They sing in Havana other essential milestones in any review of his work, such as El albúm, and Maligno, with the participation of the Venezuelan Andrés Levin, who produced the successful Caribe atómico album..

After an hour of concert, the audience raves and chants everything Andrea Echeverri asks, crowned with the peace symbol. Héctor Buitrago, his road companion, of common silence behind the bass (although it is in his head where the most unusual sound reactions explode) brings out his activism and shouts that “it is time for a revolution of consciousness, where there are no lefts no rights. ” Ask for support for the National Unemployment of November 21 that promises to freeze Colombia, and in which they are involved to the chest. The band's message, long after they put Colombian rock in the sights of the world, remains that of acceptance, reconciliation and respect for the other.

The climax comes, inevitably, with its great international successes Bolero falaz and ans Florecita rockera, chanted as if we were in a Latin rock temple, in the Luna Park let's say, and it was necessary to let out a scream that fell three years in the throat.

In the epilogue, Andrea, the one with the sensitive voice that Gustavo Cerati loved, says that it is a tradition to give gifts at her shows and grab a lot of frisbees. Then note that in the plastic it says “Aterciopelados, Cuba 2016”…

"I don't know what kind of energy this has, but I hope it's a revival energy," he shouts, and starts throwing them into the audience.