BIME returns to Bilbao to celebrate its tenth anniversary

After the success of its first edition in Bogotá last May, the great international meeting of the music industry, BIME, will celebrate its tenth anniversary from October 26 to 29 in Bilbao, Spain.

For this celebration, it launches a new logo and image, honoring the maturity and consolidation acquired after 10 years of constant evolution.

With the proposal to re-think music and everything that surrounds it, the event will have two main sections, distributed in different spaces: BIME PRO, the professional congress, which will be held at the Euskalduna Palace, and BIME LIVE, which will be a year more, space to share and celebrate live music.

The theoretical meeting confirms its first speakers from both continents: Adam Smalley (US), film editor and music supervisor, who has been part of the Sundace Institute and has worked on films such as Gladiator, Mission Impossible, Twilight, Kung Fu Panda; Ana Bustamante (ES) general director of Mediterráneo, a group of audiovisual, cinematographic and digital content producers of Mediaset España; Christine White (US) programmer of the New Orleans Jazz & Heritage Festival, ranked 11th on Billboard's list of the 50 best festivals in the world in 2022; Florencia Juri (AR) manager of Nathy Peluso and Tini and director of the Yuukii Music label; Mehmet Dede (US) programmer at the Drom room in New York, talent buyer and expert in internationalization for artists in the US market; Rafa Sardina (US) music producer recognized with 18 Latin Grammys who has collaborated with artists such as Stevie Wonder, Lady Gaga, Michael Jackson, Beyoncé, Rosalía, John Legend, Elvis Costello & The Roots, Shakira and Luis Miguel, among many others; Rocío Torres (ES) founder of the CHICA collective, a project aimed at women and people from the LGTB+ community, among many others. 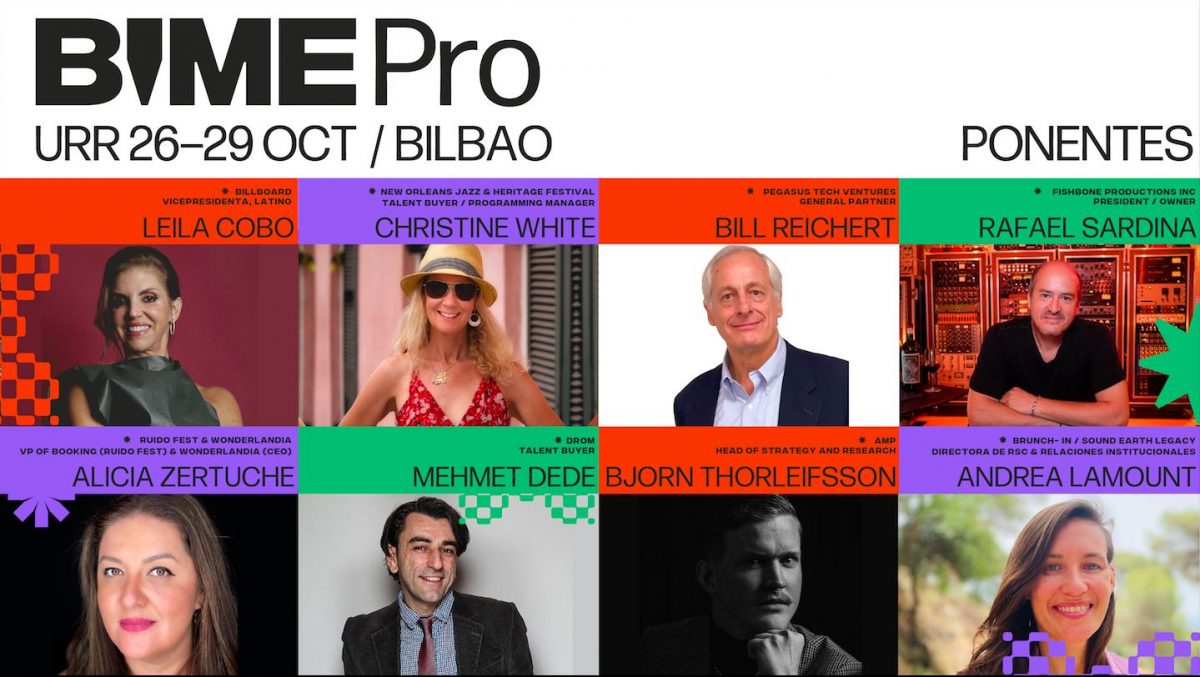 The shows so far confirm a list of young talents such as Anna Majidson (France), Albertine Sarges (Germany), Gianluca (Chile), Hipnótica y Los Besos (Argentina), Atzur (Austria), and Spanish locals such as Idoia, Merina Gris and Mice (Euskadi), La elite, Carlota Flaneur (Catalonia), Dani (Galicia), Muerdo (Murcia) and many more to be confirmed, with the support of Andalusia, Colombia, Aragon, the Netherlands and Sounds From Spain.

BIME PRO will open to new musical genres, such as classical music, electronic music and flamenco, and the Film Music Lab will be presented, a project where composers and film directors will work together, composing original music for different productions and whose result can be seen live during professional sessions.

The program will be accompanied by different panels on composition for cinema and audiovisual production, starring figures from these fields. In addition, there will be a special program for labels with a focus mainly on independents. Another great novelty will be the BIME metaverse; and it is that the spirit of constant innovation that has characterized this event during its 10-year history, will take it to the metaverse in Uttopion, winners of the 2021 StartUp Competition.

To connect Europe and America, collaborations rain down: BIME, together with BASQUE.MUSIC, will host for the first time a mission from the European Music Export Exchange, the association of European music export offices, which will bring to Bilbao more than 20 experts in internationalization of music from different parts of the continent.

Calls are currently open to access the CAMPUS+ Scholarship that offers 18 young people from Europe and Latin America to participate in an advanced training program in the music industry for 5 days and the Start Up! Competition, with a chance to win a trip TradeMission to BIME Bogotá 2023, a tour of introductions by Venture Capitals in Silicon Valley, a pre-pitch mentorship with Bill Reichter of Pegasus Tech Ventures and a booth at the STARTUP Village.

If you want to attend the professional meeting, you can get tickets on the web bime.net. They are now available for professionals at a special price in the PRO, CAMPUS and ONLINE accesses. Students or those under 25 years of age may obtain a 50% discount.

Since its birth in 2013, BIME has brought together professionals from all over the world in the Biscayan capital; turning the city into the epicenter of innovation, technology, networking and the future of the music industry. A real space to reflect on the challenges that drive the future of a sector that is in constant transformation.