Cuban music is a vast territory, a continent of sonorities crowded into an insula. Here they cook deli and flavors equally. But the Cuban music has lacked a leg of the table that without it, at this point of the meal, the banquet comes down: marketing and communication.

How many good groups or soloists of our country are confined to their immediate surroundings, to the playlist of a small group of "initiates"? Or, the B side of the same problem: how many composers and performers remain in their comfort zone, lying on their historical credentials, without worrying about investigating where the world is going, crossing experiences and styles, knowing other aesthetics? Like all language, music develops in constant dialogue.

Looking again to provoke reflections, move to creative action, returned AM-PM America for its Music with its panels and workshops. It was opportune to dedicate the fifth meeting to communication and marketing, taking into account that despite the high cost of Internet connectivity in relation to the average salary, Cubans do not stop having autonomous initiatives associated with the network. And music, of course, still springs up everywhere.

People who do not wait

On June 19, at the Ludwig Foundation in Cuba, there is no other soul. There are independent producers, managers, music students and artists. Start AM-PM 2019 and the public wants to hear the representatives of the projects invited to the panel Cuban experiences of communication in music: Carmen Souto (The Megaphone), Carolina Noa (Bonus Track), Susú Salim (Puntilla Films), Michel Boutic (DBoutic Music) and Gretel Garlobo (MSK). The panel was also completed with the participation of Marianela Santos, who directs the communication and marketing team of the Bis Music label, belonging to the state company Artex.

When mobile data arrived on the island, these ventures were already here. They launched, without asking permission and sniffing a minimum of favorable conditions, to move things a bit in the antediluvian ecosystem of music and entertainment in the Greater Antilles.

Each project is different: The Megaphone promotes and manages the placement on the grid of certain musical products of Cuban Television; Bonus Track designs and executes the promotion of artists and events in all media; the young startup MSK broadcasts concerts and artists on Facebook, while developing a web directory and an App with profiles and contacts; and DBoutic Music is an advertising agency that manages social networks and distributes content for El Paquete, the famous "Internet offline" of Cubans. 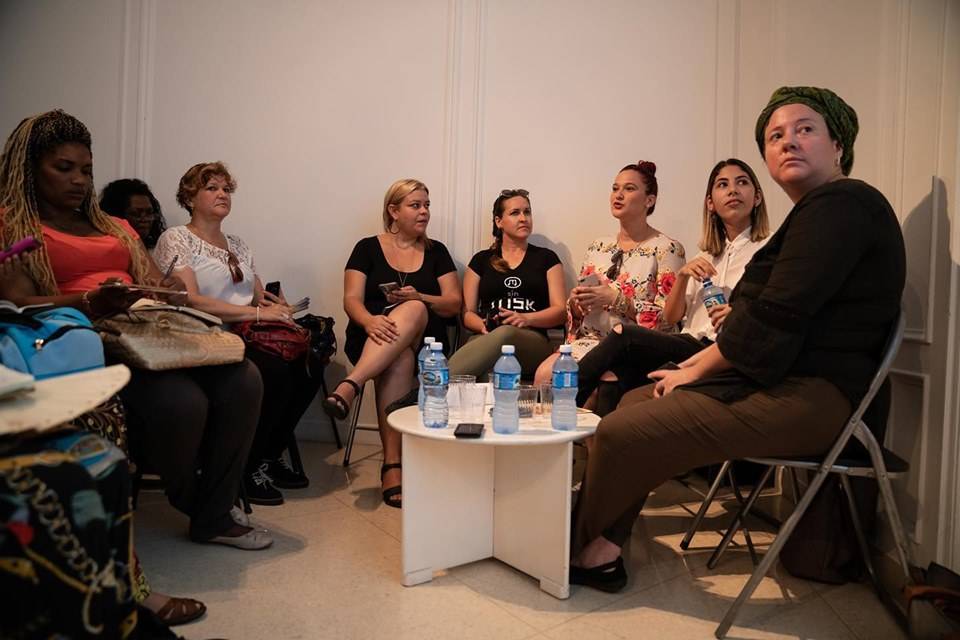 For its part Bis Music stands out among the official labels for the management of social networks and digital marketing; while Puntilla Films has become a Multi Channel Network (MCN) and certified YouTube partner, which gives it advantages to monetize content, analyze and develop audiences and manage digital rights.

They agree that Cubans, both musicians and their audiences on the Island, arrived late to the online cake and now it is necessary to learn the possibilities of the web for the distribution of content and publicity, as well as the legal implications. There is no other option but to jump into the pool, rehearse strategies and learn from mistakes.

Thus, over time, Puntilla Films achieved clients such as Los Van Van, Marc Anthony, Gente de Zona and Leoni Torres; and Bonus Track manage the communication of events in Havana like the concerts of Blondie and Rufus Wainwright.

In the panel there was consensus that it is not enough to be on digital platforms and social networks, you have to reach audiences with good content because there is more online music than you can consume.

In this scenario it is beneficial, says Carmen Souto, "to articulate effective bridges between the enterprises and the official institutions". Some may complement the others, because although state companies and record companies are interested in improving the communication of their products, Gretel Garlobo believes that "it is not enough because artists have a life beyond the record".

Marianela Santos, from Bis Music, sees no contradiction or competition between private and cooperative communication ventures, and state record labels. "It's good that the communicative panorama of music is diversified, the record companies produce recorded music, and that implies their promotion, but the public is no longer interested in interacting with the institutional networks as much as with the artist's own."

Michel Boutic puts the cherry on the cake. He tells his experience mainly promoting urban music, specifically the reguetón and its derivation criolla, the cast, black sheep of the Cuban sonorities according to the institutions and certain cultural elites. He has not needed official blessing for his business to grow incessantly. If there is an audience for a proposal, Boutic's nose detects it and takes the musician —Self-taught or academic, small or large, of any fashion genre— where are your potential fans. He uses social networks, El Paquete, and three young men who travel the Havana boardwalk at night, distributing Zapya 1Gb with the songs and videos of his clients.

These Cuban experiences take advantage in their own way of the decentralization of the current music industry. All aesthetics have their audience, however small it may seem, and from any place in the world, you can instantly follow the career of artists that you would never have heard according to the analogical paradigm of production and record distribution. Then it influences the usual: ingenuity, creativity and constant work.

Stand out in the media, be an artist at all times

The musician makes a learning trajectory both in the media and on stage. Believe so Humphrey Inzillo, who serves the main course of the debates on June 20 and 21.

The Buenosairean one edited Rolling Stone (Argentina) and now he does it in the magazine Brando, of the daily The nation; also record the podcast The circular life and is a member of the Network of Musical Journalists of Ibero-America (RedPeM.IB). He also produced albums like The Justiciar Cha, cha, cha. Tribute to Os Mutantes (2010) and Uruguayas Champions! (2011). He knows what he is talking about when he proposes the workshop How to grow audiences for your music with proper communication.

Inzillo recommends musicians develop contact with potential fans (in social networks), and the relationship with the mass media (through a press agent). To look at an example of good practices, it takes us to the networks of singer-songwriter Jorge Drexler, who released singles like Ice lifeguard from your home on Facebook Live. The sense of closeness and warmth between the life-work of the artist and his fans is essential to retain the audience.

The Argentine journalist also constantly mentions the importance of alliances between fellow musicians (feats and crossings of genres and styles), and with other artists, ergo Manu Chao and the Polish cartoonist Wosniak who made his album covers unmistakable; or the Argentines Kevin Johansen and Liniers (cartoonist) who turned with shows where the first sang, while the other improvised live drawings. These experiences, as well as the composition of music for film and theater, are examples of how to move towards different audiences. 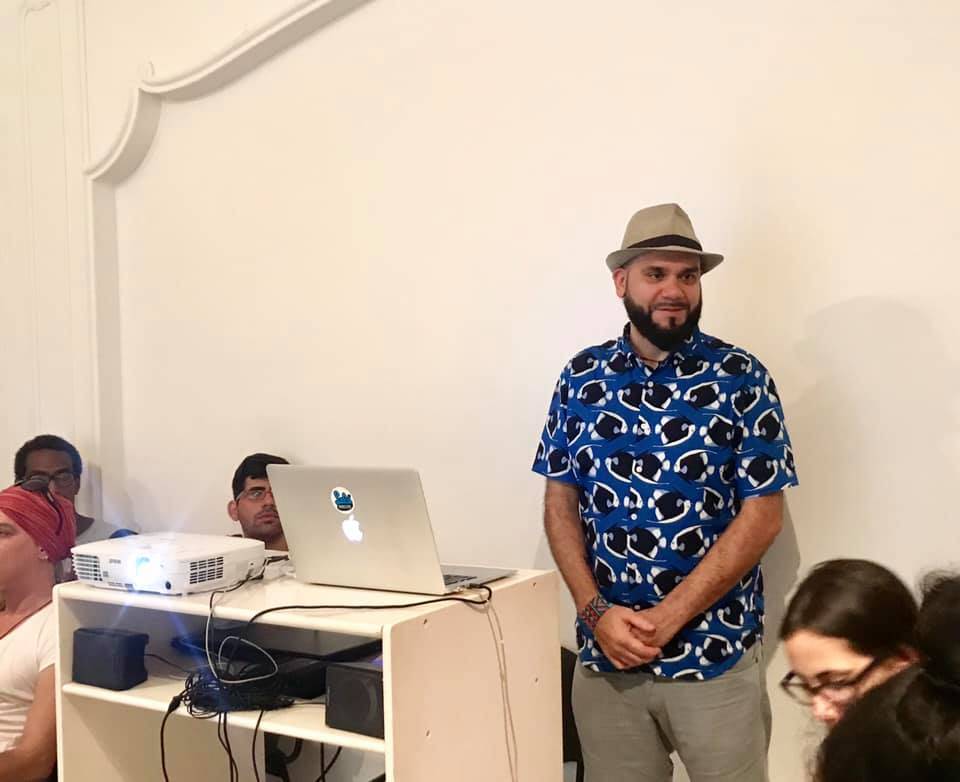 "We have to think and achieve a differential advantage in our communication, call the attention of journalists who receive hundreds of emails with concert dates and press releases about bands", explains Humphrey Inzillo and rivets with a question that every journalist has asked sometime: why does a musician want to appear in the media if he is not clear about what he is going to say?

With the change of paradigm in the commercialization of music, the discs became another one of the "communication excuses", the living model of a phonogram published every two years expired. The higher incomes have to be generated in another way, such as the live show or digital sales, and to stay in the wave you have to generate attractive content constantly, coherently and taking into account that in the contemporary ecosystem a musician is not only when on a stage or in a recording studio.

"For someone from a hyperconnected country, the difficulties to access the Internet in Cuba produce a mixture of abstinence and mental relaxation very attractive," he jokes minutes after concluding his workshop.

"Six months ago there was no 3G here and now yes; Probably, soon, many difficult issues linked to the dynamics of social networks will change, which are very necessary tools to interact with publics and businessmen, to achieve audiences and project a career abroad ".

A Cuban project that emphasizes when talking about communication is the late Buena Vista Social Club: "they followed this logic of production that included a book, a documentary film, the album and the concerts, went some way to the transmedia narrative".

All communication work must be coherent with the aesthetics and the conceptual proposal of each artist. Humphrey Inzillo is interested in musicians who look for their identities, landscapes and local cultures and mix those elements with the most contemporary sounds.

"It seems to me indispensable to mix tradition with the future, regional with global, universal with local. I want to see authentic artists, who show in their work and their communication management what I can not find elsewhere, "he concludes.

Humphrey Inzillo arrived in Cuba thanks to the collaboration of the National Institute of Music (Inamu) of Argentina. Its director Diego Boris Macciocco also gave a talk about the work of the entity with a five year foundation, in the Union of Writers and Artists of Cuba.

The Argentines showed Inamu's experience as a "non-state public entity", a management model that guarantees the independence of the entity's policies, regardless of the sign of government in power. For Macciocco, "artistic freedom is fundamental" and that cultural organizations are directed by a "manager, better than a professional politician".

The Inamu arose from a union movement that claimed and got from the government of Cristina Kirchner a Law of Music (2013) according to current times. In his short life he has shown muscle and intelligence to promote public policies and good practices in the industry, and manages a promotion fund to support Argentine musicians with projects anywhere in the world.

There is more than one lesson for Cuban institutions, and for musicians, who rarely show a guild drive to work for common interests, beyond the musical collaboration of turn.

Precisely, opening windows to successful management experiences in other parts of the world, weaving alliances and collaborative networks among diverse actors of cultural processes, and contributing to access to knowledge in areas of little or no training experience in Cuba, are some of the proceeds of the AM-PM America event for its Music.

Some tips from Humphrey Inzillo to manage good communication:

. Diversify communication in different channels, not only through the traditional mass media.

. Create a profile for each social network and set update periods.

. Become friends with other musicians and get new followers.

. Establish a link with specialized journalists, through networks, retweeting or sharing articles that have value for the followers of your group.

. Be attentive and document every relevant moment of the creative processes.

. Build a difference in each event you want to promote.

. Draw several communication objectives, annual or semi-annual (how far I want my audience to grow, what means to reach).

. Thinking about a coherent image and speech, knowing what to say in the interviews.

. Encourage collective and long-term work through a team of press and communication, design, photography, social networks. If you do not have one, you can hire a professional, it can be an opportunity to grow together.